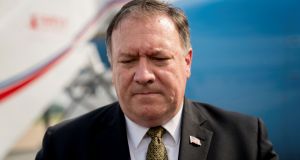 North Korea’s state-controlled newspaper on Sunday accused the United States of “double-dealing” and “hatching a criminal plot” against Pyongyang, after Washington abruptly cancelled a visit by Secretary of State Mike Pompeo.

Negotiations have been all but deadlocked since US president Donald Trump’s summit with North Korean leader Kim Jong Un in Singapore in June.

Mr Pompeo has pressed for tangible steps toward North Korea’s abandonment of its nuclear arsenal while Pyongyang is demanding that Washington first make concessions of its own.

North Korea’s Rodong Sinmun newspaper said US special units based in Japan were staging an air drill aimed at “the infiltration into Pyongyang”, citing a South Korean media outlet.

“Such acts prove that the US is hatching a criminal plot to unleash a war against the DPRK and commit a crime which deserves merciless divine punishment in case the US fails in the scenario of the DPRK’s unjust and brigandish denuclearisation first,” the paper said.

Since the summit, the two sides have struggled to narrow differences over the North’s nuclear weapons programme

“We cannot but take a serious note of the double-dealing attitudes of the US as it is busy staging secret drills involving man-killing special units while having a dialogue with a smile on its face,” it noted.

A spokesman at the US embassy in Seoul said he had no information on the drill alleged in the newspaper. The US military spokesman in South Korea was not available to comment.

The editorial, which did not mention the Pompeo visit, urged Washington to give up the “pointless military gamble” and implement the Singapore agreement, in which the leaders pledged to work towards a complete denuclearisation of the Korean Peninsula.

Since the summit, the two sides have struggled to narrow differences over the North’s nuclear weapons programme.

Pyongyang is calling for a declaration of peace as part of security guarantees designed to encourage it to abandon its nuclear weapons and ballistic missiles, while the Trump administration says a peace deal and other concessions will only come after more progress on denuclearisation.

Mr Trump partly blamed China for the lack of progress with North Korea and suggested that talks with Pyongyang could be on hold until after Washington resolved its bitter trade dispute with Beijing. China expressed “serious concern” about Mr Trump’s comments, which it called “irresponsible”. – (Reuters)