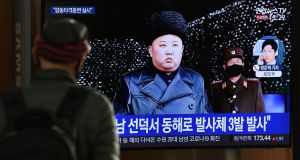 Seoul’s joint chiefs of staff said the three launches were made from a town in the South Hamgyong province with missiles flying as far as 200km.

It is the second set of weapons testing from Pyongyang in the last 10 days and followed a four-month hiatus.

The previous round of testing was condemned by five European members of the UN Security Council, to which North Korea said: “The reckless behaviour of these countries instigated by the US will become a fuse that will trigger our yet another momentous reaction.”

Some experts have said North Korea may intend to catch South Korea off balance before seeking help in reviving its dilapidated economy, since the US has said sanctions on North Korea will stay in place unless it takes significant steps toward denuclearisation.

“At the domestic level, his regime claims to protect the people with drastic quarantine measures and military exercises against external threats,

“Pyongyang may be seeking international assistance, but remains obsessed with not appearing in an inferior position to Seoul. ”

Nuclear talks between Pyongyang and Washington remain stalled since the second summit between Mr Kim and US President Donald Trump in Hanoi, Vietnam, in early 2019 ended without any agreement.

Subsequent talks between the two countries failed to produce much progress amid disputes over how much sanctions relief should be given in return for a limited step to move away from nuclear weapons by North Korea. – PA