North Korea says it has detained a US university student for committing a 'hostile act' and wanting to 'destroy the country's unity', the third western citizen known to be held in the isolated state. Video: Reuters 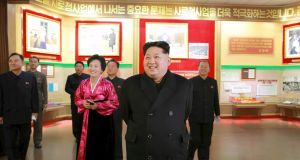 North Korean leader Kim Jong Un is pictured during a visit to a museum earlier this week. His country, which recently spiked tensions in Asia with a nuclear weapons test, says it has arrested a US college student for allegedly conducting a “hostile act” against the communist country. Photograph: Reuters/KCNA.

North Korea, which recently spiked tensions in Asia with a nuclear weapons test, says it has arrested a US college student for allegedly conducting a “hostile act” against the communist country.

A one-sentence dispatch on North’s official KCNA news agency said Otto Frederick Warmbier had entered North Korea as a tourist and “was caught committing a hostile act against the state”.

KCNA said the student’s real intention was to “undermine North Korea’s unity under the US government’s acquiescence and control.”

His Facebook profile shows that in recent years the 21-year-old University of Virginia student had visited Ireland, but he had also been in Israel and Cuba.

According to reports from a China-based travel agency, Mr Warmbier was on a tour of North Korea and he was detained on January 2nd, which was four days before Pyongyang tested a nuclear device which it claimed was a thermonuclear device, drawing the ire of the international community.

“We are in touch with Otto’s family, the US State Department and the Embassy of Sweden in Pyongyang and doing all we can to secure his release,” Gareth Johnson of Young Pioneer Tours told Reuters.

Westerners are regularly arrested in North Korea, many of them Christian evangelists trying to proselytise.

A 60-year-old South Korean-born Canadian pastor was arrested in North Korea last year and given a life sentence for subversion, while earlier this month, a Korean-American called Kim Dong-chul told CNN that he had been captured for spying for South Korea was in jail.

In 2009, two American journalists were arrested in North Korea and freed after Bill Clinton flew to Pyongyang, while in 2014, Pyongyang released three detained Americans.