No kidding: Year of the Goat blamed as China birth rate slows 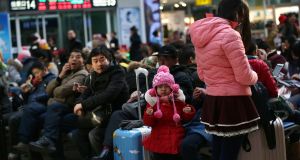 Travelling during the annual spring migration in Beijing, China, when people return to their hometowns to celebrate new year on February 8th: heralding the Year of the Monkey. Photograph: How Hwee Young/EPA

Chinese population planning officials have blamed the inauspicious Year of the Goat in the zodiac for a nearly two per cent drop in the number of babies born in the world’s most populous nation in 2015, and hope the forthcoming monkey year will lead to a more abundant one for children.

A total of 16.55 million children were born in China in 2015, about 320,000 fewer than 2014, despite a relaxation of the family planning policy in 2013, according to data from the National Bureau of Statistics.

In Chinese there is an expression that basically says: “Out of 10 sheep [or rams or goats], nine will suffer” which relates to the fact that goats [or sheep or rams] are livestock raised to be slaughtered.

An official from the National Health and Family Planning Commission told Beijing News that some parents were holding off having children until the Year of the Monkey, which starts on February 8th.

The total population of the Chinese mainland was 1.37 billion in 2015, up 6.8 million on a year earlier, while 2014 saw an increase of 7.1 million over the 2013 population, according to the statistics bureau.

There had been forecasts last year that China would see about one million more newborns than a year earlier because of the easing of the one-child policy, but it appears that young women in China are following the rest of developed Asia in having fewer children.

“The decrease in the number of newborns was caused by the low childbearing intentions of women in their ideal childbearing age and shrinking number of those at the ideal age,” Huang Wenzheng, a former Harvard University assistant professor and expert on population, told the news outlet yicai.com, quoted by the Global Times newspaper.

This year, the one-child policy became the two-child policy with the removal of restrictions across the board, but low childbirth rates may be the norm now, according to some demographers.

Mr Huang believed the impact of allowing all couples in China to have a second child was overestimated and he expected the number of births in 2017 was unlikely to exceed 17 million.

The data also showed that the number of working-age people in China fell by 4.9 million last year, a record decline. China has 911 million people of working age (between 16 and 60), pointing to a greying population trend of fewer young people entering the workforce and an increase in retirees.

“The unexpected dip should, at least, warrant an immediate and careful review of the implemented policy because the stakes cannot be higher given the rapidly ageing Chinese population,” China Daily said in an editorial.

The number of Chinese people over 65 has reached 143 million, or 10.5 per cent of the population.

Yao Meixiong, deputy head of the Centre for Population Census of the Fujian Province Bureau of Statistics, was quoted in the Global Times saying China was set to experience negative growth every year after 2025.

The data also shows that there could be a lot of lonely men roaming the country. The male population reached 704 million last year while the female population was about 670 million, leaving a male to female ratio of 105.02 to 100 and reflecting a preference for boys, especially in rural areas.