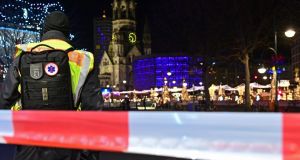 A policeman with a backpack reading ‘medical service’ stands in front of the Kaiser-Wilhelm-Gedaechtniskirche memorial church with the Christmas market on Breitscheidplatz square in Berlin, Germany on Saturday night. Photograph: Clemens Bilan/EPA

Berlin police on Saturday evacuated a Christmas market that was the scene of a fatal attack three years ago to investigate a suspicious object.

Tunisian Anis Amri ploughed a truck into the Christmas market at Breitscheidplatz in 2016, killing 12 people. Amri, who had Islamist militant ties, was later shot dead by Italian police after he fled Germany.

“Currently, our colleagues are working at the #Breitscheidplatz Christmas Market and are clearing it in order to follow up indications of a possibly suspicious object,” Berlin police tweeted.

“All visitors left the Christmas market in a calm and collected manner. Thank you. Our colleagues are now starting the search on the #Breitscheidplatz and in the Memorial Church,” the police added a short while later.

Police cordoned off the square.

Mass-selling daily Bild reported in its online edition that police had detained two men, both Syrian, in connection with the Breitscheidplatz evacuation but did not cite its source. Bild said they had experience with explosives.

One of the two had been living in the western German state of North Rhine-Westphalia, while the other is the subject of an arrest warrant in the United States for charges relating to explosives, Bild reported.

When contacted by Reuters, the police had no additional comment beyond their tweets. – Reuters

1 Dangerous student stalker sentenced to seven years in jail
2 All students will not return to school even if social distancing rules are relaxed – McHugh
3 Miriam Lord: Reluctant Halligan bangs the nail on the head
4 Trump announces clampdown on social media companies
5 Miriam Lord: Taoiseach is trapped in a Zoom session from hell
Real news has value SUBSCRIBE