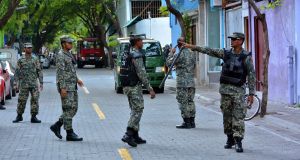 Maldives National Defence Force personnel patrol the streets in the capital, Malé, on November 4th, after a state of emergency was declared. It has since been lifted. Photograph: Sharwaan/Sun Online via AP

The Maldives suspended basic civil rights for a week in order to allow the security forces carry out “a total clean up” following a number of explosive finds, the country’s tourism minister has said.

Maldivian president Abdulla Yameen announced a 30-day state of emergency on November 4th, citing threats to national security after officials said an explosive device was discovered near his residence in the capital, Male. The decree, which was lifted on Tuesday, gave the security forces sweeping powers and suspended civil rights such as the right to assemble and to free expression.

A day after the emergency came into effect, the national parliament voted to impeach vice-president Ahmed Adeeb, who is accused of plotting to assassinate Mr Yameen. The president’s speedboat exploded on September 28th, injuring Mr Yameen’s wife and two others.

The US Federal Bureau of Investigations, which was asked to examine the boat, said it found “no conclusive evidence” that a bomb had exploded there, and opposition groups accused the authorities of using the emergency powers to arrest suspects before a major anti-government rally planned for last week.

In an interview with The Irish Times, tourism minister Moosa Zameer said the Indian Ocean state, a luxury holiday destination, was “a peaceful place” and that the state of emergency did not impinge on tourists. He said that following “one or two incidents” involving explosive finds the security forces had decided “it needed a total cleanup”.

Amnesty International has said the emergency decree raised “the prospect of further attacks on dissent and human rights” in the Maldives, which has had a difficult transition to democracy since the departure of the autocratic ruler Maumoon Abdul Gayoom was followed by the first multiparty election in 2008.

The United States and India, the regional power, also expressed concern about the decree, with Washington last week calling for the immediate restoration of constitutional freedoms. Commenting on the international criticism, Mr Zameer said his government was working with those countries that had concerns about recent events.

“The government’s stance on this is that it was largely for the safety and security of the people. We stand firm that freedom of assembly and freedom of speech will be primary rights which the government will not intervene into,” he said.

On the prosecution of Mr Nasheed, Mr Zameer insisted the Maldivian constitution was based on the separation of powers and the government could not intervene. “The former president has been prosecuted for an offence which happened while he was in office. This will be totally independent. The government is committed to give a free and fair trial to any case which has been brought forward to the judiciary and the independent prosecutor,” he said.

Mr Zameer declined to say if he thought former vice-president Ahmed Adeeb was responsible for the boat explosion, as investigations were ongoing. He acknowledged the FBI’s analysis but the US agency “did not say it was not a bomb” and noted that a separate Sri Lankan investigation found the blast was a “high explosive explosion”.

The Maldives’ white sand beaches and turquoise waters attracted 1.2 million tourists last year, and tourism accounts for 29 per cent of the country’s GDP. Mr Zameer said the largely remote tourist resorts were unaffected by the decree, as were air, sea and land transport services. “We are very committed to ensuring the safety and security of all our visitors,” he said.