Kazakhstan’s president steps down after 30 years in power 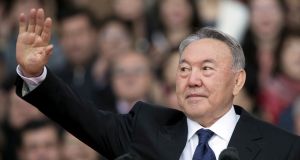 Nursultan Nazarbayev, the president of Kazakhstan, announced his resignation on Tuesday saying the oil-rich central Asian nation he has ruled for 30 years needed a new generation of leaders.

Mr Nazarbayev said Kassym-Jomart Tokayev, the head of the Kazakh Senate, would assume the presidency until the next election in 2020, but that he would continue to play a role in determining the country’s affairs.

“I have taken a decision that was not easy for me, to lay down my powers as president,” Mr Nazarbayev said in a lengthy statement broadcast on television in Kazakhstan on Tuesday evening. “I and my generation did everything for the country we could ... The world changes and a new generation arrives. May they try to make the country even better.”

Born in 1940, Mr Nazarbayev came to power as general secretary of the Kazakh communist party and was elected president after the country became independent from the Soviet Union 28 years ago. Widely admired for overseeing Kazakhstan’s peaceful transition from backward Soviet republic to an industrialised, outward looking economy, he has drawn criticism for his authoritarian ruling style and intolerance of dissent.

Many people in Kazakhstan believed that Mr Nazarbayev, who approved legislation in 2010 making him national leader for life, would never step down. However, there has been speculation that a transition might be looming since last month when Mr Nazarbayev asked Kazakhstan’s constitutional court to clarify the process of a presidential resignation.

One of Mr Nazarbayev’s closest allies, Mr Tokayev has held top posts in government since Kazakhstan’s independence and has the experience to manage an orderly transfer of power without disrupting the status quo. Fluent in Russian, English and Chinese, he is also well known in foreign capitals from his time both as foreign minister and Kazakhstan’s representative at the United Nations.

Mr Tokayev “fully supports the domestic and foreign policies pursued by the country”, Mr Nazarbayev said. “I believe Tokayev is the very person we can trust to manage Kazakhstan.”

While giving up the presidency, Mr Nazarbayev is not planning a total surrender of power. In addition to his honorary position as “Elbas” or national leader – a role that carries immunity from prosecution for life – he will continue to serve as chairman of Kazakhstan’s National Security Committee and as leader of the ruling political party Nur-Otan, as well as retaining membership of the constitutional court.

Mr Nazarbayev used his resignation speech to recount the momentous changes he has orchestrated to bring independence, stability and greater prosperity to Kazakhstan. Turning emotional at times, he thanked his people for the support that he said had encouraged him to devote all his strength and energy to the task of leading the country. “We have put Kazakhstan on the map of the world where it did not exist as a state. We have our own flag, hymn and emblem,” he said.

Drawing to a close, Mr Nazarbayev signed a decree formalising his resignation as president – a theatrical gesture marking a dramatic juncture in Kazakhstan’s history as an independent state.