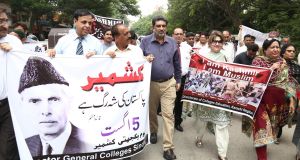 United Nations Secretary-General Antonio Guterres urged India and Pakistan to exercise restraint, his spokesman said on Monday, after India revoked the special status of Kashmir, the Himalayan region that has long been a flashpoint in ties with neighbouring Pakistan.

“We urge all parties to exercise restraint,” UN spokesman Stephane Dujarric told reporters, adding that UN peacekeepers observing a ceasefire between India and Pakistan in the state of Jammu and Kashmir “has observed and reported an increase in military activity along the line of control”.

India on Monday moved to grasp its only Muslim-majority region more tightly. In the most far-reaching political move in one of the world’s most militarised regions in nearly seven decades, India said it would scrap a constitutional provision that allows the state of Jammu and Kashmir to make its own laws.

“The entire constitution will be applicable to Jammu and Kashmir,” interior minister Amit Shah told parliament, as opposition lawmakers voiced loud protests against the repeal.

Foreign ministry officials later briefed envoys of several countries on the changes to the state’s administrative status, saying they were aimed at promoting good governance, social justice and economic development. The government also lifted a ban on property purchases by non-residents, opening the way for Indians to invest and settle there, just as they can elsewhere in India. The measure is likely to provoke a backlash in the region.

Pakistan, which also claims Kashmir, said it strongly condemned the decision, which is bound to further strain ties between the nuclear-armed rivals. Pakistan’s prime minister Imran Khan said the move “was in clear violation of the United Nations Security Council resolutions” in the region, according to a statement released after a telephone call with Malaysian prime minister Mahathir Mohamad on Monday evening.

“As the party to this international dispute, Pakistan will exercise all possible options to counter the illegal steps,” its foreign ministry said in a statement. India and Pakistan have fought two of their three wars over Kashmir, where a nearly 30-year armed revolt has killed tens of thousands of people. Hundreds of thousands of Indian troops have been deployed to quell it. India blames that rebellion on Pakistan, which denies the accusation, saying that it backs the right to self-determination for Kashmir.

Regional leaders have previously said stripping Kashmir’s special status amounts to aggression against its people. Srinagar’s streets were largely deserted as travel curbs kept people indoors, said a Reuters photographer who found a telephone connection in a restaurant near the city’s airport.

There was heavy deployment of security forces across the city, but no signs of protest. A top government source in New Delhi told reporters the restrictions were precautionary, adding that life was expected to return to normal fairly soon. Prime minister Narendra Modi and his Hindu nationalist Bharatiya Janata Party (BJP) had pushed for radical political change in Kashmir even before he won re-election in May, saying its laws hindered integration with the rest of India.

“Politically, it’s advantage BJP,” said Happymon Jacob, a professor at Jawaharlal Nehru University in the Indian capital. “The scrapping of Article 370 of the constitution is likely to set off a slew of political, constitutional and legal battles, not to speak of the battles on the streets of Kashmir.”

Monday’s move reflects Modi’s muscular approach to national security. In February, he ordered war planes into Pakistan after a militant group based there claimed responsibility for a deadly attack on a military convoy in Kashmir. That prompted a retaliatory raid by Pakistan. Introduced decades ago, the constitutional provisions reserved government jobs and college places for Kashmir’s residents, among other limits aiming to keep people from other parts of India from overrunning the state. The government has also decided to split the state into two federal territories, one formed by Jammu and Kashmir, and the other consisting of the enclave of Ladakh, citing internal security considerations. Turning the state into a federal territory allows Delhi to exert greater control.

“Today marks the darkest day in Indian democracy,” ex-chief minister Mufti, under house arrest, said on Twitter. “It will have catastrophic consequences for the subcontinent.” India’s interior ministry ordered all states to put security forces on “maximum alert” to maintain public order and quash the spread of any rumours. BJP general secretary Ram Madhav hailed the government’s actions as ushering in a “glorious day”.

In Modi’s home state of Gujarat, people shouted slogans of support on the streets. In Pakistan there was anger at India, with protests extending to the capital, Islamabad and the southern commercial centre of Karachi. In Muzaffarabad, 45 km (28 miles) from the two countries’ contested border, dozens of protesters held black flags and burnt car tyres, chanting “Down with India”.

Tension had risen in Kashmir since Friday, when Indian officials issued an alert over possible militant attacks by Pakistan-based groups. Pakistan rejected those assertions, but thousands of alarmed Indians left the region over the weekend. On Sunday, Khan said the tension had the potential to become a regional crisis and the time was right for US president Donald Trump to mediate. In July, Trump said Modi had asked him if he would like to be a mediator on Kashmir, but India, which has been staunch in its position that the issue can only be resolved bilaterally, denied that Modi sought mediation. – Reuters