Preserving cows under BJP rule has resulted in 65 people being lynched, beaten to death 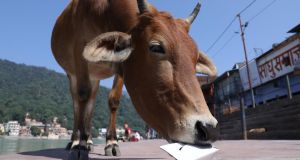 In the western Gujarat and northern Haryana states, cow slaughter is punishable with imprisonment of up to 14 years, or a fine, or both Photograph: Deepak Malik/NurPhoto/Getty

He aims to fund these cow sanctuaries through a raft of taxes imposed on consumer items like alcohol, government-operated toll-ways, various public sector corporations and assorted government-run rural and agricultural organisations.

State animal husbandry minister S P Singh Baghel said each village and urban centre would be provided with a cowshed, managed by local government bodies, to house 1,000 animals each. He said there would be no shortage of funds for the project.

The announcement followed the comprehensive ban on cow slaughter enforced by Adityanath, a former monk and staunch Hindu nationalist, after he assumed office in early 2017.

He also issued a fiat to preserve tens of millions of cows at great expense until they died naturally, years after having gone dry. In deference to Hindu sentiment, he stressed the sanctity of cow protection not only for his administration, but also that of Modi’s federal government, which came to power in May 2014.

Such cow preservation measures, however, adversely impacted the rural economy, as cattle owners were compelled to maintain their aged cattle, which they had earlier sold as beef, at great cost.

The annual cost of maintaining some 1.1 million unproductive cattle in Uttar Pradesh is estimated at about €515 million. Nationally, the cost of sustaining more than 5.3 million cows is about €1.4 billion per year.

The average lifespan of a cow is 20 years, about half of which is productive.

Faced with such expenditure, owners began abandoning their elderly cows. The stray animals then damaged crops while foraging for food and posed a traffic hazard by squatting on poorly lit streets and highways across the state, causing accidents that killed scores of drivers.

Adityanath’s imposition of the “gau kalyan” or cow welfare cess was prompted by protesting farmers rounding up thousands of aging cattle and herding them into schools and government buildings across his state.

This, in turn, led to numerous cow-infested schools and official buildings being shut down until an alternative home was found for the animals.

Similar cow-protective measures are in place in all 10 of India’s 29 states ruled directly by the BJP, and in another five where the Hindu nationalists are in power in coalition governments.

In Modi’s western home state of Gujarat and northern Haryana state, for instance, both of which are ruled by the BJP, cow slaughter is punishable with imprisonment of up to 14 years, or a fine, or both.

Last August, the BJP administration in Uttar Pradesh’s neighbouring Uttrakhand state went a step further by appointing itself the “legal guardian’” of millions of cows, following a court judgment.

Invoking the ancient “parens patriae” or legal protector doctrine in its 41-page judgment, the high court in the mountainous state, 386km north of Delhi, banned the slaughter of all cattle and the sale and consumption of beef.

Citing ancient Hindu and Buddhist scriptures, the judges threatened prosecution for anyone abandoning or maltreating their cattle and ordered the appointment of mobile infirmaries within three weeks to minister to their welfare.

Additionally, special squads headed by a senior police officer and a vet were instructed by the court to patrol the countryside once every 24 hours to further ensure cow protection in a region that remains woefully short of hospitals and offers dismal healthcare.

Preserving cows across India under BJP rule has resulted in at least 65 people being lynched or beaten to death by Hindu mobs on suspicion that they had either abandoned the animals or sold them for slaughter.

Almost all such victims were Muslims, for whom consuming beef is not banned on religious grounds. Many videos of these lynchings have gone viral on social media.

The confrontations between Muslims and Hindu mobs could become an issue in the general elections that are due before May. Hindus constitute more than 80 per cent of India’s population of about 1.3 billion and Muslims comprise about 15 per cent.

The BJP, however, denies all charges of “communalising” cow-related issues and accuses opposition parties of provoking anti-Hindu propaganda.