Head of US armed forces to hold talks in Seoul

At the frontier between North and South Korea there is no sign whatsoever of imminent conflagration. It’s less a front line and more of a theme park. Video: Peter Murtagh 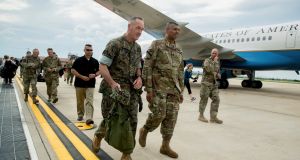 The head of the US armed forces, chairman of the joint chiefs of staff, former Marine Corps Gen Joseph Dunford, will hold talks in Seoul on Monday with the president of South Korea, Moon Jae-in.

Afterwards, he will head to China and Japan on what appears to be an exercise in military briefing-cum-diplomacy by the Trump administration as the US, and the rest of the world, waits to see if North Korea will make good on its threat to dispatch four missiles in the direction of the US Pacific island territory of Guam.

The US president Donald Trump vowed retaliation in the event, without specifying what form that might take.

As Gen Dunford arrived in Seoul on Sunday, in Washington, the head of the Central Intelligence Agency (CIA), Mike Pompeo, told the pro-Trump Fox News network that the agency did not believe there was a threat of imminent nuclear war with North Korea.

“This administration has made our policy very clear. We’ve engaged the world to support that policy,” he said, adding that the US would no longer adopt a posture of “strategic patience”, in dealing with Pyongyang.

He rejected notions of the US being on the “cusp of nuclear war”. He said: “I’ve seen no intelligence to indicate we’re in that place today” even though North Korea had been moving towards the successful development of nuclear-tipped ballistic missiles at an “ever alarming rate”.

Gen Dunford will also meet a range of South Korean senior military personnel, and the politicians to whom they answer, while in Seoul. One topic they will almost certainly discuss will be Seoul’s on/off reluctance to deploy fully the US-supplied and operated Thaad (Terminal High Altitude Area Defense) anti-missile missile system.

Six batteries have been positioned but only two are fully activated. Moon Jae-in has come under persistent pressure from protesters not to deploy the other four batteries.

He stalled their deployment in recent months, bowing to pressure to have an environmental impact assessment of their stationing some 300km south of Seoul. However, the government has now let it be known that an on-the-spot inspection of the batteries conducted on Saturday by officials from the defence and environment ministries showed that electromagnetic radiation and noise levels were both within legal limits.

Protesters at the Thaad deployment site, who have been there for over a year, say they do not accept either the results of the tests or the sincerity of the government in carrying them out.

1 Coronavirus: Donnelly ‘cautiously optimistic’ about Dublin
2 Man with electric scooter who died in Meath was due to get married in the coming weeks
3 ‘Entirely wrong’ to remove pandemic payment from students, says Sinn Féin leader
4 Traffic volumes show Donegal locking down to greater extent than Dublin
5 Hospitality industry suffers another blow as New Year’s Eve festival is cancelled
Real news has value SUBSCRIBE