Half-price cocktails but no scoops at reporters’ club in Cambodia 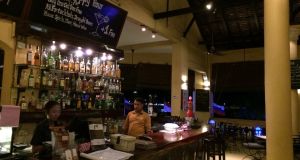 It’s happy hour at the Foreign Correspondents’ Club on Sisowath Quay in Phnom Penh, where half-price cocktails are plentiful but foreign correspondents are few. In their place are coachloads of tourists sitting at long tables in the open-air bar and diningroom, their chatter drifting over the colonial-style balustrade from where you can witness the rushed meeting of the Tonlé Sap and Mekong rivers.

The FCC has the look of a century-old watering-hole and safe haven for war-weary reporters. White columns (once sewerage pipes, now filled with concrete) support exposed wooden rafters where ceiling fans whisk the warm evening air. In a back room, leather armchairs and a billiards table continue the colonial theme.

Photographs depicting moments in Cambodia’s troubled history dot the FCC walls. One records the day in April 1975 when the city fell to the murderous Khmer Rouge regime. Among the many punters strolling between the club’s two levels, stopping to squint at photos and other memorabilia, there’s a sense of quiet appreciation for dispatches crafted under pressure when this hallowed space served as a newsroom for papers and broadcasters across the world.

You could easily picture, say, Ernest Hemingway here, ordering a gin and tonic or throwing a tantrum. Indeed, it has been rumoured he did just that. And stories have circulated about the FCC during the war in neighbouring Vietnam, when US planes were reportedly spotted from the rooftop as the conflict spilled into Cambodia.

In fact, the club opened only in 1993, two years after the signing of the Paris peace accords that paved the way for national elections, and long after the Vietnam war and the death of Hemingway. Despite the name, and to the surprise of at least some customers, it hasn’t been used by foreign correspondents for more than 15 years.

That chapter in FCC history lasted less than a decade, when the club served a posse of reporters who had arrived in town on the heels of a 20,000-strong UN mission tasked with overseeing the elections as the country emerged from decades of foreign occupation, civil war and genocide. It ended contentiously, with Phnom Penh’s foreign correspondents distancing themselves from the premises and rebranding as the Overseas Press Club of Cambodia (OPCC) in 2002. They have no new fixed abode.

The club was a marriage of convenience between Hong Kong-based investors and the correspondents. The former provided the space in what was then a no-go area among the sweatshops and crowded apartments on the former Quai Marx-Lenin. The latter supplied the name and turned it into Phnom Penh’s cultural and intellectual centre.

“We always thought we had the name,” says the club’s first president and former Reuters journalist Leo Dobbs. “We gave them a bit of cachet – they couldn’t do it on their own without the journalists – but we did know it was a business arrangement.”

Diplomats, UN staff and expat visitors flocked to the “F”. A club constitution was drafted and a board established. With the FCC’s help, the first Khmer journalists’ association was set up. Speakers in the club’s heyday included actor Peter Ustinov, Timorese resistance hero Xanana Gusmão and Oscar winner Haing Ngor from film The Killing Fields, says OPCC treasurer and former president Luke Hunt.

After the 1993 elections there was plenty to report on, not least the continued insurgency by remnants of the Khmer Rouge in the north of the country, near Thailand. Nate Thayer, back from the regime’s stronghold of Anlong Veng with a scoop – Pol Pot’s final interview – filed it from the club for the Far Eastern Economic Review.

There are stories – confirmed or denied, depending on whom you ask – of wild nights when rounds of ammunition were drunkenly shot from the terrace. Everything changed, however, when the correspondents discovered the commercial side of the house had registered the FCC name, and several variations of it, with the Ministry of Commerce.

“Maybe we were a bit naïve,” says Dobbs. “In a way we should have registered the name ourselves.”

The move was viewed as a betrayal, says Hunt, who was president in 2002 during the controversy. “Our lawyers went and quietly registered the OPCC. We had to keep it on the quiet because we were afraid they’d go out and nick our new name too.”

There are up to 70 foreign correspondents in Cambodia at any one time, Hunt estimates. OPCC meetings are held at various bars but there is no permanent gathering place. “Given the state of media in this country, we have an important role to play,” he stresses, referring to prime minister Hun Sen’s ongoing clampdown which has so far resulted in the closures of a newspaper and more than 20 radio stations, and the detention of two radio journalists. News events of which today’s FCC customers seem blissfully unaware.