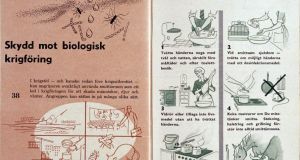 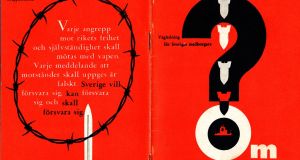 For decades, it was the Armageddon Ikea catalogue of Sweden. Now, in an ominous sign for the new year, Swedish authorities are to republish an updated version of Om kriget kommer (If war comes).

Starting in 1943, the pamphlet was issued to every household in Sweden and informed citizens how to prepare – and act – in a national crisis, particularly in the case of nuclear war. In 1991, at the end of the cold war, the booklet was considered redundant and distribution ceased, with only basic information retained in the telephone book.

Now that decision is being reversed: a nod to rising world tensions, in particular with neighbouring Russia, and the fact that few Swedish households have a landline, let alone a telephone book.

Some 4.7 million copies of the updated pamphlet will be delivered later this year, updating information about civil defence sirens, how to behave in an air-raid shelter and what belongings you should pack in case of having to flee: ID, practical clothing and gas masks if distributed, but “luggage no more than the family can carry itself”.

The adjacent page would meet the approval of Japanese declutter queen Marie Kondo, with pictures of well-folded clothes and blankets, toilet paper, cutlery, torch and “a food bag, at least for two days”.

The brochure shows an elderly man in a trench coat alongside a woman in a headscarf carrying a travel cot. Beside them, a haunted young boy is wrapped up well for a chilly end of the world.

Christina Andersson of the Swedish Civil Contingencies Agency (MSB) says the focus of the new booklet is not solely on the threat posed to Swedes by war but also climate change, terror attacks, pandemics and manipulation of information.

“People need to learn and know about how to deal with it,” she told the Aftonbladet newspaper.

A survey by her agency last month showed that 59 per cent of Swedes are concerned about nuclear proliferation – up 23 percentage points from the previous year. Fears of IT hacking have grown (59 per cent expressing concern, up from 40 per cent), while nearly one in two Swedes (46 per cent) fear a biological or chemical weapon attack, compared to 29 per cent in 2016.

As well as the practical advice, the pamphlet is expected to update the cold war propaganda slogans, such as “Resistance . . . depends on you: your efforts, your determination, your will to survive!”