As Phnom Penh shuts down media, journalists are standing up for democracy 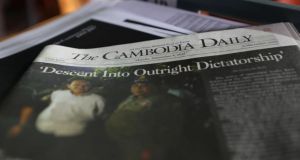 Cambodian media: the final issue of the Cambodia Daily newspaper, with the headline “Descent Into Outright Dictatorship”. Photograph: Satoshi Takahashi/LightRocket via Getty

On September 3rd journalists at the Cambodia Daily newspaper found themselves covering two big stories. One was the arrest of the only opposition leader likely to pose a threat, in elections next year, to Hen Sen’s continued reign as prime minister after 33 years. The second was the Daily’s own demise.

“As a reporter, there was big news happening. Kem Sokha was arrested on the same day we had to close. We had to be aggressive and do our reporting on it. We worked very hard,” says Van Roeun, who for 20 years served as reporter and then commissioning editor at the paper, which was regarded as stridently independent and fearless in its coverage.

“There was also a lot of sadness. We felt very desperate. A lot of reporters and photographers were taking pictures of the the final day, the final hours, of the paper. And a lot of journalists came to cover it: AP, Reuters and other newspapers.”

Unable to pay a disputed tax bill of more than €6 million, the paper was forced to close after 24 years. Its last issue bore the front-page headline “Descent Into Outright Dictatorship”. In a statement the paper said its closure was an “assault on press freedom thinly disguised as a tax dispute”.

Since then, in the face of international condemnation, the clampdown on independent media and critics of the prime minister has continued. Kem Sokha’s Cambodia National Rescue Party was dissolved by the supreme court; about 20 Khmer-language radio stations that carried programmes produced by Radio Free Asia, Voice of America and Voice of Democracy have been shut down, and Radio Free Asia was itself forced to close and two of its journalists, arrested for “espionage”, face up to 15 years in prison.

The swift deterioration of the media landscape has had a chilling effect on journalism and beyond, according to Moeun Chhean Nariddh, director of the Cambodia Institute for Media Studies. “Self-censorship is not only being practised by journalists but also by their sources. Media, legal and other experts are practising it by not answering critical questions from journalists.”

A new freedom-of-information law is being drafted that will allow journalists access to a wider range of government files, says Nariddh, which is “better than nothing, but details on high-profile cases – illegal logging, land-grabbing by powerful business interests, the killing of the activist Kem Ley – will not be released”.

Such topics have for years provided fodder for investigative reporting in Cambodia, and are closely linked. Kem Ley, a political commentator, was shot dead in July 2016. Three days earlier he had taken part in a radio discussion with the now-closed Radio Free Asia.

The subject was a report by NGO Global Witness that detailed how Hun Sen’s family had taken control of many of Cambodia’s biggest companies, amassing vast personal fortunes in the process. Many members of the prime minister’s extended family hold powerful posts in politics, the military, police, the media and charities. The report, titled “Hostile Takeover”, exposed the family’s links to companies involved in land grabs that have caused mass displacement and destitution among Cambodia’s rural poor.

One case detailed the actions of an agriculture firm linked to the family that is accused of using arson attacks and cobras to evict people. It is one of many contained in a dossier at the International Criminal Court as evidence that the ruling elite grabbed so much land that it amounts to crimes against humanity.

Reporters without Borders, which demoted Cambodia four places, to 132 out of 180 countries, in its 2017 World Press Freedom Index, has condemned the moves. “We’re still waiting for Cambodia’s ministries of finance, interior or information to provide details justifying this fine,” it said of the amount allegedly owed by the Daily.

“These latest cases clearly show that the law and the judicial system are being used to suppress any independent reporting and, above all, to intimidate the entire press,” says Daniel Bastard, head of Reporters without Borders’ Asia-Pacific desk.

The closure of radio stations has deprived many Cambodians of access to information, according to Naly Pilorge of the Cambodian League for the Promotion and Defense of Human Rights. “Cambodia is still an illiterate society. People often don’t have access to or can’t afford a newspaper or can’t read, so typically a radio becomes a fixture in rural and urban homes. But now the radios are silent.”

In terms of traditional media, the Phnom Penh Post is regarded as a last bastion of independent reporting. “It’s tough times,” says Kay Kimsong, its editor, who spent his early years as a journalist with the Cambodia Daily. “I’m very sad to have lost the Daily. It was my journalism university. When it closed it seemed to me like a library had burnt down. We lost all the knowledge and wisdom” of a publication that, at 24, was “born the same day as democracy was born in Cambodia. Now it’s gone, maybe democracy is going the same way.”

The Post is being audited by tax authorities, says Kimsong, “but that is okay. We have nothing to hide.” Since the Daily’s closure his duty editors and reporters are particularly vigilant. “One word could make the whole company crash. We are simply careful.”

There is a “certain level of paranoia” among foreign correspondents based in Cambodia, says Nathan Thompson, president of the Overseas Press Club of Cambodia, which issued a statement deploring the arrest of the two Radio Free Asia journalists. “Some people are now looking to use pseudonyms. Those kinds of discussions are happening.”

Ouk Kimseng, under-secretary of state at the ministry of information, claims not to see what all the fuss is about. “We have media freedom,” he says, sitting in an office at the ministry. “Negative reporting was at the root” of recent radio closures. “The political nature of certain media outlets [means] when you hear their reports it’s only to try to shame individuals. For example, Hun Sen, they’re trying to shame him by any means. It is ill-intentioned media coverage . . . You talk about people being worried about a blow to democracy. My neighbours, for example, they don’t care. They see the current developments can help strengthen the country. The government is committed to uphold the tradition of the current democracy as well as possible.”

For Pilorge there is a mismatch between the Cambodia visitors see and the underlying reality. “There’s Starbucks – but something is wrong. The physicality of Phnom Penh doesn’t match the conversations you have. You see SUVs, malls, enormous vibrancy to the city, but people are telling you they won’t talk about certain things.”

Kay Kimsong remains optimistic. “In Cambodia we have strange things. If you look at the country, it shouldn’t have been able to build Angkor Wat 1,000 years ago, but it did. The river here goes back and forth” – the Mekong flows in one direction in wet season and the opposite direction in dry season. “Sihanouk became king, then he changed, then he came back as king. Now is a dark time. We have to hope it will be a bright future. Hope is good food. Sadness is bad food.”

This report was supported by the Simon Cumbers Media Fund