Cause of Henan province fire, which injured another six people, being investigated 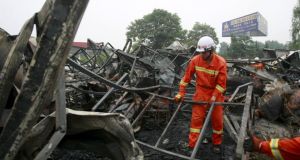 Firefighters clean up the debris after a fire at a rehabilitation centre for the elderly in Sanlihe village of Pingdingshan, Henan province. Photograph: Reuters

Thirty-eight people were killed in a fire at a home for senior citizens in China’s central Henan province, state media said, the latest disaster in a country with a poor record on work safety.

The cause of the fire, which injured another six people, was unclear, Xinhua said. Rescue efforts were still underway.

China has a history of similar disasters. Workers are often poorly trained or ill-equipped to protect themselves from accidents.

A fire at a warehouse in Guangdong province killed at least 17 people in February, and a blaze at a poultry slaughterhouse in the northeastern province of Jilin in June 2013 killed 120 people.

The average age is rising in China, the world’s most populated country, and demographers have said government limits on family size threaten the future of the economy as fewer people are left to pay and care for a greying population.

One in four Chinese will be older than 60 by 2030, according to the Ministry of Civil Affairs.