Is ‘herd immunity’ a health policy or a by-product of spreading infectious disease? 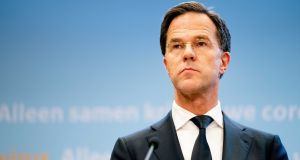 Dutch prime minister Mark Rutte during a press conference after a cabinet crisis team on Covid-19 in The Hague. Photograph: EPA/Bart Maat

Is “herd immunity” – the idea that a virus may be allowed to spread through a population at a controlled pace generating group immunity as it goes – a healthcare strategy or simply a by-product of the spread of infectious disease?

In fact, it can be either. The difference is that in the case of the former it’s a political choice by government. And where Covid-19 is concerned it’s a particularly controversial – some might even say unethical – choice. Why? Because there is no vaccine.

As a result some will develop a mild version of the disease and recover, while society’s more vulnerable will face a totally unnecessary risk of illness or perhaps even death. They are being placed in harm’s way.

In the Netherlands and the UK the Rutte and Johnson governments have been under fire for allegedly planning to pursue herd immunity as a strategy to “control” the virus and prevent a rapid recurrence, while simultaneously protecting the vulnerable.

Mark Rutte has been slated in some quarters for allegedly reversing away from it only belatedly when the death toll began to mount, essentially misleading the public about the government’s original intent.

The reality for governments, however, is that – having taken all the expert advice available – each and every decision about the marshalling of resources and the overarching strategy to be followed is, in fact, political.

That is what governments are for: taking hard decisions. The challenges may be similar, but not every national response will be the same. Witness Sweden and its remarkable non-lockdown. And where a strategy is proved wrong it must change rapidly, as Sweden may or may not be forced to do.

So has the Rutte government been caught wrong-footed? Well, that depends on whether you believe the government had or had not decided, however briefly, to pursue herd immunity. In the end it comes down to trust.

In his television address in March, the PM certainly put his foot in it. He said the government’s aim was to spread the peak of the virus over a longer period – in other words, flatten the curve – “while we build up immunity”.

A few days later he admitted that his words may have caused some misunderstanding. He said that “herd immunity” was “a side effect” of the government’s strategy – which certainly had never been to ensure that as many Dutch citizens as possible became infected.

The good news for Rutte is that the first political polling since the start of the crisis shows the public overwhelmingly believes him.

His “intelligent lockdown”, where schools, universities, bars and restaurants will remain closed until next month at least, while supermarkets and some other shops remain open, has huge public support. There hasn’t been a formal order to stay at home, though that is the advice.

In any case what is far more pressing now is to establish why the Dutch are apparently faring so much worse that their German neighbours, with an equally well-resourced health system and similar social distancing measures, in keeping the death rate down.

Confirmed fatality rates vary considerably: late last week Italy stood at 10.8 per cent, Spain at 8 per cent, the Netherlands at 7 per cent, the US at 1.8 per cent and South Korea at 1.6 percent – with Germany at 0.7 percent or marginally higher.

Whereas Germany was undoubtedly better prepared and resourced, one possible explanation may be that German testing has been systematic and widespread, while Dutch testing has been confined to health workers and the seriously ill, which could account for the higher proportion of fatalities.

It may be a forlorn hope but that just about sums up where many “northern” countries such as the Netherlands stand this weekend: banking on the effectiveness of social distancing, hoping for some signs of flattening – while preparing for the worst.