Canadian prime minister Justin Trudeau pauses for more than 20 seconds before answering when asked for his reaction to US president Donald Trump possibly using the military to quell street protests in America. Video: Reuters 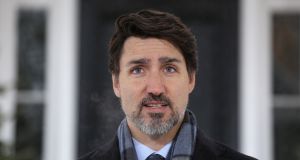 Canadian prime minister Justin Trudeau appeared to be briefly lost for words when asked about the use of tear gas on protesters angered by racial inequality in the US.

Mr Trudeau paused for 21 seconds when asked about president Donald Trump and the methods used to clear demonstrators to allow him a photo opportunity amid unrest in Washington DC on Monday.

He then added that Canadians were watching their southern neighbour with “horror and consternation”.

Mr Trudeau has long been careful not to criticise his counterpart as Canada relies on the US for 75 per cent of its exports.

But the prime minister, who is usually quick to answer, paused and struggled to come up with the right words when asked about Mr Trump calling for military action against protesters. He avoided mentioning Mr Trump directly.

“We all watch in horror and consternation at what is going on the United States,” Mr Trudeau said. “It is time to pull people together.”

Police broke up a peaceful and legal protest by several thousand people in Lafayette Park across from the White House ahead of a speech in the Rose Garden by Mr Trump on Monday.

The protesters had gathered following the killing of black man George Floyd in police custody in Minneapolis a week earlier, with similar protests continuing around the US.

After demonstrators were cleared, Mr Trump walked out of the White House gates and across the cleared park to make a surprise visit to St John’s Church.

The president, standing alone in front of cameras, raised a Bible but did not mention Mr Floyd, the church or the peaceful protesters police had just cleared away. - AP