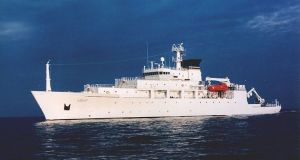 The USNS Bowditch (above), an oceanographic survey ship, was about to retrieve the unmanned underwater vehicle when it was seized in the South China Sea. File photograph: Wikimedia Commons

A Chinese Navy warship has seized an underwater drone deployed by a US oceanographic vessel in international waters in the South China Sea, triggering a formal diplomatic protest from the US and a demand for its return, a US defence official has said.

The incident, the first of its kind in recent memory, took place on Thursday northwest of Subic Bay off the Philippines, just as the USNS Bowditch, an oceanographic survey ship, was about to retrieve the unmanned underwater vehicle (UUV), the official said, speaking on condition of anonymity.

“The UUV was lawfully conducting a military survey in the waters of the South China Sea,” the official said.

“It’s a sovereign immune vessel, clearly marked in English not to be removed from the water - that it was US property.”

The Chinese seizure will add to concerns over China’s growing military presence and aggressive posture in the disputed South China Sea, including its militarisation of maritime outposts.

A US think-tank reported this week that new satellite imagery indicated that China has installed weapons, including anti-aircraft and anti-missile systems, on all seven artificial islands it has built in the South China Sea.

The seized underwater drone was part of an unclassified programme to collect oceanographic data, including on the salinity, temperature and clarity of the water, the official added.

It said such data can help inform US military sonar data, since sound is affected by such factors.

The US issued the formal “demarche”, as such protests are known, through diplomatic channels and included a demand that China immediately return the underwater drone.

The Chinese have acknowledged the demarche but not responded to it, the official added.