Carme Forcadell oversaw parliament session on independence despite it being forbidden 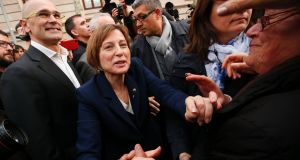 The Catalan parliamentary speaker, Carme Forcadell, has appeared in court on Friday accused of overstepping her powers and defying the judiciary by allowing politicians to debate and vote on a blueprint for their region’s secession from Spain.

Ms Forcadell oversaw a parliamentary session on July 27th in which the findings of a commission set up to prepare the path to independence were discussed and approved, despite the fact the Spanish constitutional court had apparently already forbidden such a move.

Hundreds of demonstrators, including many separatist politicians, turned out on the streets of Barcelona to support the parliamentary speaker ahead of her summons before the Catalan high court of justice.

Ms Forcadell claimed Catalan lawmakers were being censored and accused the Spanish government of using the judiciary to silence the independence movement.

“You cannot persecute through the courts the debating of ideas,” Ms Forcadell said after her half-hour appearance before the magistrate handling the case. “Where are you supposed to be able to talk if it’s not in parliament?”

Outside the courtroom, supporters waved independence flags, sang nationalist songs and some held up pictures of Ms Forcadell, who could face a fine and be barred from public office if found guilty.

Since a regional election last year confirmed that pro-independence parties narrowly control the Catalan parliament, it has embarked on a so-called roadmap towards creating a new republic.

Nationalist lawmakers have been drawing up legislation to that end and want to stage a binding referendum on independence in the autumn of 2017.

On Wednesday, the constitutional court struck down a resolution easing the path to this referendum passed by the Catalan parliament in October.

‘Nobody is being persecuted’

“Today, nobody is being persecuted, nobody is being investigated for defending their ideas or for having political objectives, but rather for disobeying a court,” he told a radio interviewer.

Mr Millo’s appointment was one of several recent changes of personnel which had been seen as hailing a more flexible approach to Catalonia on the part of prime minister Mariano Rajoy. However, Ms Forcadell’s court appearance showed how politically flammable the issue remains.

Meanwhile, there have been signs of discord between parties inside the independence camp, sparked partly by disagreement over the 2017 budget, as well as the insistence of the anti-capitalist Popular Unity Candidacy (CUP) on staging acts of civil disobedience.

On December 23rd, Mr Puigdemont plans to chair a summit on the independence referendum plan in a bid to reassert the movement’s unity.