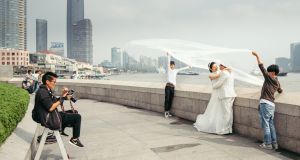 Chinese models pose for a wedding picture in Shanghai on Bund’s promenade. The state is frowning on fancy celebrations.

Chinese authorities are clamping down on extravagant weddings as part of a broader campaign to boost morality in public life and want to encourage a more frugal approach to getting hitched.

Under President Xi Jinping, the Communist Party has called for a return to a more conservative lifestyle under the banner of “traditional socialist values”.

Earlier this year China banned a number of undesirable elements, such as actors with tattoos. It has also tried to eradicate hip-hop, which it considers “demotivational culture”.

“Modern weddings included high-cost monetary gifts, extravagance, vulgar performances that lead to a decline in morality,” China’s ministry of civil affairs was quoted as saying by the Economic Daily.

The ministry called for simple and modest wedding etiquette, to create a good social environment of frugality and anti-extravagance.

There are plans to standardise marriage rites to address these issues, an official from the ministry said on China’s state broadcaster CCTV.

Weddings in China can indeed be over-the-top. People give hongbaos (red envelopes) stuffed with thousands of yuan in cash to the lucky couple.

In the run-up to the wedding, people spend a fortune getting elaborate wedding albums done in scenic spots. Wedding celebrations include extraordinary, professionally edited videos.

Dowries or bride prices, which is the money given to a bride’s family by the groom’s parents, have also been getting out of hand.

The ministry is keen to force people to ease off on the hazing rituals that guests perform on the bride and groom. These pranks are meant to scare off evil spirits, but often get out of hand. Last month a groom was hit by a car as he tried to escape his friends’ attempts to tie him up and beat him.

In October, some local governments introduced regulations outlining the amount people can spend.

In Wenzhou, in eastern China’s Zhejiang province, public officials were ordered to limit their wedding budgets. The budget for each table at a wedding banquet was set at no more than 3,000 yuan (€380) and the red envelope could not contain more than 300 yuan (€38).

There were sceptical blogposts on the Weibo social network.

“In China, the wedding ceremony is more important than the actual marriage certificate. I want to go overseas to get married and keep it a bit simple,” wrote Ye Yangqi.

Someone with the name North Jade wrote: “The most frugal way is not to get married. The government should be happy that people are willing to get married at all. What and how they want to do it, it is none of the others’ business.”

Another commentator called Xia wrote: “Get me a bride first.”

The ministry is also beginning to clamp down on over-the-top funeral processions.