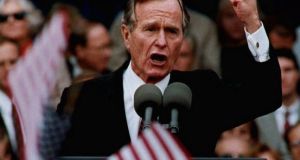 Arab rulers have expressed condolences over the death at 94 of former US president George HW Bush, who launched the 1991 war that liberated Kuwait from Iraqi occupation.

Kuwait’s Emir Sheikh Sabah al-Ahmad al-Sabah referred to Bush’s “rejection of Iraq’s occupation of Kuwait from the early hours” and said he never “forgot the Kuwaiti people and will remain in their memory”.

The emir lauded Bush for trying to “create a new international order based on justice and equality among nations”. Images of Bush were projected on to the surace of the Kuwait tower, a symbol of the emirate’s capital.

While Arab leaders condoled, Arab citizens have been reminded of a war that they blame for 27 years of conflict and despair.

Iraqis hold Bush responsible for the deaths of 20,000 Iraqi soldiers, massive destruction of their country’s infrastructure, and a punitive sanctions regime which deprived them of food, medicine and other essentials. Thousands of Iraqi children died of malnutrition and illness before the sanctions regime was eased in 1996.

While refusing to invade Iraq to oust president Saddam Hussein, Bush urged Iraqi Kurds and dissident Shias to revolt. The army responded with brutal force, prompting Bush to declare the Kurdish region a “safe haven”. This led to the creation of the Kurdish autonomous region, the declaration in 2017 of Iraqi Kurdish independence, and Baghdad’s politico-economic pressure, which forced the Kurds to renounce secession.

Resentment over the US military presence in Saudi Arabia, which hosts the Muslim holy cities of Mecca and Medina, produced the rise of al-Qaeda’s founder Osama bin Laden whose 19 agents, including 15 Saudis, conducted the September 2001 attacks on New York and Washington.

Arabs also hold the senior Bush responsible for the 2003 war waged on Iraq by his son George W Bush, who replaced the secular government with a pro-Iranian Shia fundamentalist regime and turned Iraq into a failed state. Al-Qaeda established itself in Iraq and created Islamic State (Isis), which has devastated both Iraq and Syria.

In August 1990, Iraqi troops swept into Kuwait after the emirate ignored oil export quotas, which Baghdad argued cost Iraq $14 billion. Saddam Hussein charged Kuwait with stealing $2.3 billion by pumping oil from a disputed field, and demanded Kuwait cancel a debt of $15 billion loaned for the 1980-88 war with Shia Iran, which had tried to export its revolutionary ideology to the Sunni Arab world.

Bush said the invasion “will not stand”, imposed sanctions on Iraq and assembled in the Saudi desert a coalition of western and Arab forces to drive Iraqi forces from Kuwait. Compromises proposed by Saddam were either rejected or ignored by Bush.

While Saudi Arabia, Egypt, Syria, Morocco, Qatar, Oman and Bahrain joined western powers in Bush’s coalition, the Arab public vehemently opposed this war. Jordan’s King Hussein dispatched envoys to Baghdad with the aim of averting war. Palestinian leader Yasser Arafat attempted to mediate. Both failed and were punished by the Bush administration once the war ended.

To reward Arab coalition members, Bush sponsored the Madrid peace conference in October 1991 where Arab rulers sat down for the first time at a table with an Israeli delegation.

Subsequent negotiations between Jordanian-Palestinian and Israeli teams made no progress and were superseded by secret talks in Norway between Palestinians and Israelis and the launch of the failed Oslo peace process.