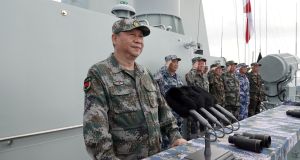 China’s navy announced it would hold live-fire military drills in the Taiwan Strait next Wednesday amid a worsening of tension in the western Pacific region.

On Thursday night the defence ministry carried a statement from the Maritime Safety Administration of Fujian province, bordering Taiwan, warning shipping from entering the area of the exercises on April 18th.

They will be the first naval manoeuvres by China in the sensitive waters since 2015, and are sure to infuriate Taiwan. They also come as Washington and Beijing engage in a tit-for-tat military build-up in the disputed South China Sea, with China installing communications jamming gear on one of its artificial island bases and the US sailing two aircraft carriers through the sea in the past two months.

The defence ministry announcement followed a large exercise by the People’s Liberation Army Navy on Thursday and a speech by Xi Jinping, China’s president, from the deck of a destroyer announcing the need for China would build the world’s leading naval force.

This “has never been more pressing than today” Mr Xi told officers on the deck of the Changsha, in a nationally televised speech. He then watched through binoculars as four J-15 fighter jets took off from the Liaoning, China’s first and only operational aircraft carrier.

The exercise was billed by state media as the largest Chinese naval drill ever, involving 10,000 personnel, 48 ships and submarines and 76 fighter jets.

“There is a good possibility that these military drills were planned many months ago, but they serve as a useful warning to Taiwan and the US not to cross Chinese red lines,” said Bonnie Glaser, director of the China power project at the Center for Strategic and International Studies, a US think tank. “Taipei should remain calm, and not look for ways to retaliate that would ratchet up tension.”

Ian Easton, a research fellow at the Project 2049 Institute, a US security think tank, and the author of a book on the threat of a Chinese invasion of Taiwan, said the drills did not amount to a major escalation.

“It is a PLA attempt to use the media to inflame a sense of insecurity in Taiwan, classic political warfare,” he said. “Nonetheless, you can bet US and Taiwanese military intelligence will be monitoring this exercise closely, just in case there is more than meets the eye.”

Taiwan’s president, Tsai Ing-wen, was on Friday scheduled to inspect a naval base at Su’ao on the island’s northeast coast. While the visit was not directly linked to China’s drills on Thursday, a senior official told the Financial Times that Ms Tsai “has instructed government agencies to enhance the efficiency and effectiveness of crisis management” due to the “growth of China’s military activities” and other regional security threats.

“The Tsai administration is resolutely determined to accelerate the modernisation of the armed forces,” the official said.

The US navy has been steadily building its presence in the western Pacific this year. On April 10th the US aircraft carrier Theodore Roosevelt sailed through the South China Sea, which China claims as its territorial waters. Another aircraft carrier, the Carl Vinson, made a similar passage in February, angering Beijing.

In response, China late last month held the then largest-ever military exercises in the South China Sea with 40 ships, including the Liaoning. On April 10th, US officials said China had installed communications-jamming equipment on Mischief Reef, one of the artificial islands it has built in the sea, despite repeated promises not to militarise the islands.

In another step which angered Beijing, Taiwan on April 9th announced the US had agreed to grant it a licence to buy sensitive technology so it could build its own submarines. That came just weeks after US president Donald Trump signed new legislation promoting higher level visits between Taiwan and the US.

Some commentators have also connected the timing of the Taiwan Strait exercises next week to increasing tension over Syria, and Chinese support for Russia, which has troops fighting alongside Syrian government forces there. The US has threatened to bomb Syria in response to the recent chemical weapons attack on civilians.

China’s defence ministry has been particularly vocal about its support for Russia. On April 3th, defence minister Wei Fenghe visited Moscow for a security conference and was quoted by Russian state news agency Itar-Tass as saying “the Chinese side has come to show Americans the close ties between the armed forces of China and Russia, especially in this situation”.

Alexander Gabuev, an expert on Russia-China relations at the Carnegie Moscow Centre, tweeted in response: “This is the 1st time in many years that a senior Chinese military leader says [something] like that publicly.” – Copyright The Financial Times Limited 2018