More than 40 people were killed in the strike in Douma last week, WHO says

Pictures broadcast on Russian state television show people celebrating on the streets of Douma, Syria after insurgents agreed to withdraw from the last rebel-held enclave in eastern Ghouta. Video: Reuters 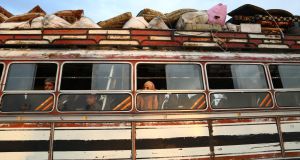 Buses carry Jaish al-Islam fighters and their families from the former rebel bastion of Douma, near Damascus, in Syria. Photograph: Nazeer al-Khatib/AFP/Getty Images. 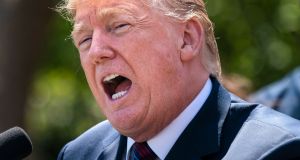 US president Donald Trump on Thursday again taunted Russia in a tweet, saying an attack on Syria ‘could be very soon or not so soon at all’. Photograph: Jim Lo Scalzo/EPA. 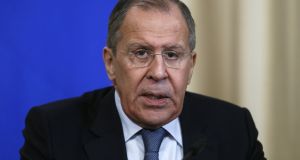 Russia’s foreign minister has claimed a suspected chemical attack in the Syrian town of Douma last weekend was fabricated with the help of an unspecified foreign intelligence agency.

Sergey Lavrov said Russian experts have inspected the site of the alleged attack in Douma, just east of Damascus, and found no trace of chemical weapons.

He said Moscow has “irrefutable information that it was another fabrication”.

Mr Lavrov, speaking to reporters in Moscow, said: “Intelligence agencies of a state that is now striving to spearhead a Russo-phobic campaign were involved in that fabrication.”

He did not elaborate or name the state.

The attack, which killed more than 40 people, has drawn international outrage and prompted the US and its allies to consider a military strike on Syria, something Moscow has strongly warned against.

Mr Lavrov reiterated warnings against military action, saying any such “adventures” would increase flows of refugees into Europe.

“Neither us nor European neighbours need it,” he said.

On Thursday, Russia’s military said Douma had been brought under full control of the Syrian government under a Russia-mediated deal that secured the evacuation of the rebels and thousands of civilians after it was recaptured by Syrian forces.

The government, however, said evacuations were continuing and no Syrian government forces had entered the town.

Douma and the sprawling eastern Ghouta region had been under rebel control since 2012 and was a thorn in the side of president Bashar Assad’s government, threatening his seat of power with missiles and potential advances for years.

The government’s capture of Douma, the last town held by the rebels in eastern Ghouta, marked a major victory for Mr Assad.

On Thursday US president Donald Trump emerged from a meeting with his national security team without a “final decision” on how to respond to the suspected chemical attack.

White House spokeswoman Sarah Huckabee Sanders said Mr Trump held a meeting with his team to discuss the situation, but she said “no final decision has been made”.

She said US officials are “continuing to assess intelligence” and are “engaged in conversations with our partners and allies”.–PA