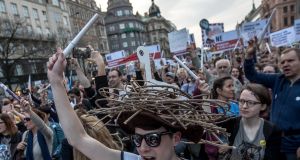 Pro-Russian Czech president Milos Zeman has outraged opponents by urging prime minister Andrej Babis to try to form a government with ultra-nationalists who question the country’s EU membership and communists who want it to leave Nato.

Mr Zeman made the suggestion to Mr Babis on Tuesday evening, when they discussed his Ano party’s failure to secure a parliamentary approval for its minority government almost six months after it won national elections.

More moderate parties refuse to back a government led by Mr Babis while he faces prosecution for alleged fraud, relating to €2 million in EU funds that one of the billionaire’s many firms received a decade ago.

The anti-immigration, Eurosceptic Mr Zeman has good relations with the communists and the Freedom and Direct Democracy (SPD) party, which is virulently anti-Muslim and wants a referendum on a possible “Czexit”.

“The presence of SPD extremists in government would harm the Czech Republic’s reputation in Europe. If Andrej Babis negotiates with them, it will confirm that he is not working for the people but only for the post of prime minister,” tweeted the Social Democrats’ chairman Jan Hamacek.

Petr Fiala, leader of the centre-right Civic Democrats, said “an informal coalition” of Ano, the communists and the SPD had been operating since the election.

“President Milos Zeman is its chief architect. So it is no surprise that he wants it to continue. It is up to Andrej Babis whether he wants to take responsibility for a government with extremists and communists.”

Mr Zeman (73) was due to hold talks on Wednesday with communist leader Vojtech Filip and on Thursday with SPD chief Tomio Okamura, who has suggested that Czechs walk near mosques with dogs and pigs – unclean animals for Muslims – and boycott kebab stalls because their owners might be financing terrorism.

Ano is expected to discuss Mr Zeman’s suggestion tomorrow, but some senior members have already refused to be part of any such coalition government.

Coalition talks with the Social Democrats broke down last week when Ano refused to allow one of its members to become interior minister, which it demanded to ensure the impartiality of the fraud investigation facing Mr Babis.

He denies wrongdoing, but suffered another blow in February when a court in his native Slovakia rejected his bid to be removed from a list of people who collaborated with the communist-era secret police.

Thousands of people protested in Prague and other Czech cities on Monday to demand that Mr Babis drop his bid to become prime minister, to help end the political impasse and allow a new government to take power.

Moderate parties have offered to form a coalition with Ano if it proposed a different premier; Mr Babis (63) insists he would step aside for a party colleague, but Ano has refused to nominate an alternative.

Mr Zeman – a frequent visitor to Russia who wants EU sanctions on the country lifted – has given Mr Babis until June to form a government, prolonging a period of political uncertainty in which his own power and profile are enhanced.