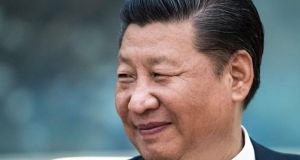 The Chinese government has introduced a data-driven social credit system to force its citizens to be honest and trustworthy, ranking them by good or bad behaviour, with performance-related rewards and punishment.

Using algorithms to keep people honest, the central message is: “Forge a public message that to keep trust is glorious”.

The new system will make citizens more accountable and build a national credit rating system, according to the State Council or cabinet, but many are wary of allowing the Communist Party access so many personal details, especially as President Xi Jinping’s government has cracked down on personal freedom.

Due to roll out in 2020, the social credit system uses big data technology to collect information on all citizens and analyse that information to rate behaviour, including financial creditworthiness and personal conduct.

One of the chief architects of the system is Lian Weiliang, deputy head of the National Development and Reform Commission.

Lian says fraud is becoming far too common in society and something needs to be done. Last year, 4.9 million people were stopped from taking flights and 1.65 million banned from trains because they had defaulted on debts.

The scope of the system is immense. In Shenzhen, thousands of unpaid parking tickets have been logged, while the People’s Daily reports that people who abuse the popular new bike-sharing schemes will see their credit rating affected.

So far, so Big Brother. There are parallels to an episode of the British science fiction Black Mirror TV show, where a woman lives in a dystopia in which people rate other’s popularity out of five stars. But while the planned mass surveillance system smacks of George Orwell orchestrated by the Men in Black, the government insists it is less sinister than it appears.

“The creditworthy will be granted conveniences in education, employment and opening start-ups, while severe wrongdoing will be made public,” run directives from the State Council.

The platform connects 37 government departments and agencies, with a commercial aspect through the People’s Bank of China and the ministry of finance, but also the food and drug administration, the national health and family planning commission, the transport, housing and urban-rural development ministries.

To help build the system, citizens will have to register with their real names for the internet, postal services, telecoms and bank accounts.

“It is a great thing to hold people who misbehave accountable. However collecting data nationwide is a huge project. It takes time,” said Tang.

“Currently the social system records are used and shared within each city, and it could affect if you get a loan from the bank if you have a good credit rating. If you have a good record, then the bank is more likely to give you a loan for a car or a mortgage,” said Tang.

Wu Chengpeng, a cyber-security expert for a Beijing bank, said the system was at the testing stage.

“Since last year, the People’s Bank of China introduced a pilot social credit system to nine provinces. Your record with the bank, loans, credit cards, public records like parking tickets, taxes, penalties, electricity and phone bills can all affect your credit,” said Wu.

“So far I am not 100 per cent sure if companies like [online retail giant] Alibaba or [popular bikeshare company] Mobike agree to provide their loan records or user black list to the credit system, but I think it is a trend,” said Wu.

The online news outlet epaper has reported that the southern city of Guangzhou this year is one of the main pilot cities for the social credit system. To date, Guangzhou has included 51 organisations and 1.8 billion pieces of data relating to 40 million citizens.

There are regular complaints in China about a lack of social accountability.

If you dodge a fare on the train you can lose points on the national social credit system, but on the other hand, you can also lose credit for not looking after your elderly parents or failing to play Good Samaritan to an injured person on the street – very sensitive right now after a woman in Zhumadian, Henan province, died after being run over twice but whose plight was ignored.

State media insists this is just part of a normalisation process in China, and likens the new platform to the US’ FICO credit score system.

The Global Times said much of the “warped” Orwellian references followed a failed pilot scheme in Jiangsu province, where citizens were ranked on their everyday social behaviou, including petitioners, who are often condemned as subversives in China.

The country has 731 million internet users, more than half the population. Some 467 million Chinese people shop online and the figure is growing strongly every year.

Such penetration makes the internet fertile ground for fraudsters, despite tight controls. Two years ago, Ryanair was scammed out of €4.6 million, while Galway-based toolmaker C&F Automotive was robbed of nearly €400,000.

Civil servants and doctors will be the first groups in society to register their credit profile, and taxes and traffic safety will be the first to be tracked. All to make sure that glorious trustworthiness prevails.