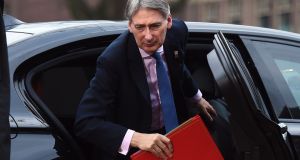 British foreign secretary Philip Hammond has said a British citizen who sold gossipy and controversial books about the Chinese leadership had most likely been “involuntarily removed” to China from Hong Kong. If so, it would be a “serious breach” of a bilateral treaty between the UK and China, he said.

Lee Po (65) and four of his associates, who work for the Roaring Currents publishers and Causeway Bay bookshop, which specialises in titles that contain political gossip and salacious stories about Communist Party officials, have all disappeared in mysterious circumstances.

“The full facts of the case remain unclear, but our current information indicates that Mr Lee was involuntarily removed to the mainland without any due process under Hong Kong SAR [special administrative region] law,” Mr Hammond said in a regular six-monthly report to parliament on Hong Kong.

There are 3.7 million British passport holders in Hong Kong, which reverted to Chinese rule in 1997. They make up more than half the population of 7.2 million.

“The full facts of the case remain unclear, but our current information indicates that Mr Lee was involuntarily removed to the mainland without any due process under Hong Kong SAR law. This constitutes a serious breach of the Sino-British joint declaration on Hong Kong and undermines the principle of ‘one country, two systems’ which assures Hong Kong residents of the protection of the Hong Kong legal system,” said Mr Hammond.

There has been no formal response from China to Mr Hammond’s comments, although Beijing has said Hong Kong’s autonomy was fully respected and no foreign officials had the right to interfere.

As well as Mr Lee, four of his associates have gone missing over the past few months, including Gui Minhai, a Swedish national who disappeared from the Thai seaside resort town of Pattaya late last year.

Mr Lee’s disappearance has led to growing unease in Hong Kong that the city’s cherished freedoms are being worn down.

The statement by Mr Hammond was the strongest indication so far by London that Mr Lee, who appeared in China last month, had been abducted.

He reportedly gave his wife, Sophie Choi Ka-ping, a letter addressed to the Hong Kong police, saying he was healthy and assisting an investigation as a witness. She had earlier filed a missing-person report after he vanished without his passport.

During a visit to Hong Kong last month, Mr Hammond said any charges against Mr Lee should be dealt with in Hong Kong, not mainland China.

He also said that the British government was closely monitoring media freedom in Hong Kong.