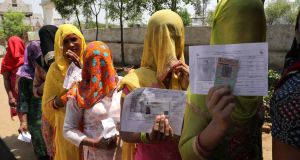 Indian women wait outside to cast their votes at a polling station in Supana village in Mathura, Uttar Pradesh, India. Photograph: Rajat Gupta/EPA

Women make up about half of India’s population of more than 1.3 billion, but they continue to be poorly represented in parliament and state legislatures 72 years after independence.

According to the independent Association for Democratic Reforms, only 209 women, or about 7 per cent of 2,856 candidates, contested the first two of seven phases of polling in India’s parliamentary elections, the second phase of which took place on Thursday.

“Few women are given tickets to fight elections by their parties,” said Santosh Alhawat, the lone woman MP from prime minister Narendra Modi’s Hindu nationalist Bharatiya Janata Party (BJP) to be elected from western Rajasthan state in the 2014 elections. Alhawat, who has not been nominated by the BJP this year, asked whether women were punished for their gender.

In other northern states like Himachal Pradesh, neither the BJP nor the main opposition Congress Party are fielding a woman candidate, while voters in Rajasthan and neighbouring Madhya Pradesh, which together have a population 40 times that of Ireland, have just six female candidates in total participating in the polls.

Congress and BJP MPs privately admit that women have often been fielded in constituencies their parties are expected to lose, indicating a tokenism on their part.

But in their manifestoes, both the BJP and the Congress Party have reiterated their promise to facilitate the passage of the 23-year-old Women’s Reservation Bill, if elected to power. This proposed legislation guarantees reserving a third – or 181 – of all parliamentary seats for women. It’s a promise both parties have made numerous times before, but have done nothing about after assuming office.

The Bill also aims to quadruple the number of women MPs in the 245-member Rajya Sabha, or indirectly elected upper house, in addition to boosting their numbers in state legislatures.

Attempts by previous governments to pass this Bill invariably ended in chaos, with all parties opposing it on one specious ground or another. In one such attempt, Socialist Party MPs who otherwise championed female empowerment shouted slogans against the Bill, tearing up a draft copy and hurling it at the speaker before stomping out of the House.

According to a recent report by the Geneva-based Inter-Parliamentary Union, India stood 149th out of 193 countries ranked by the percentage of elected women representatives in their respective parliaments.

With just 66 female MPs in the current 543-member Lok Sabha (elected lower house), India dropped three places in the rankings in 2019. This places it well behind neighbouring Bangladesh and Pakistan, ranked 97th and 110st respectively, and even Saudi Arabia, which comes in at 106th. This is despite the fact that India was led for 14 years by a woman, Indira Gandhi, up to 1984.

Female representation in India’s 29 state assembles and in seven federally administered territories is even lower – at 9 per cent – while in state councils or indirectly elected upper houses, it is 5 per cent.

“The abysmally low representation of women in legislatures is due to the patriarchal structure of Indian politics,” said Seema Mustafa of the Centre for Policy Research in New Delhi. Male-dominated political parties are, without exception, unwilling to field women in elections, even though their vote is crucial in electing governments, she added.

Of the more than 900 million eligible Indian voters, some 430 million are women and, in recent years, they have voted in larger numbers than men.

However, only two of India’s 2,293 political parties have initiated steps for increased female presence in the country’s legislatures.

Eastern Bengal state’s Trinamool Congress or TMC, led by the fiery Mamta Banerjee (64), has nominated women in 17 of its 42 parliamentary seats for the 2019 polls, while neighbouring Odisha has similarly reserved a third of its 21 seats for female candidates.

TMC founder and two-term MP Kakoli Ghosh Dastida said fielding women in elections is her party’s policy, based on the belief that no society can develop without “uplifting” the status of its women. Also, no gender sensitive laws can be enacted without women in power, she said.

Odisha’s 72-year-old chief minister Naveen Patnaik (72), a former writer and socialite, is of the same opinion. “No household, no society, no state and no country has ever moved forward without empowering its women,” Patnaik declared in the state assembly last November.

Voting began last week in India’s election and will end next month in the world’s largest such exercise, involving more than 900 million people. Votes will be counted on May 23rd and results are expected the same day.