Russia condemns US plan to increase its military presence in Poland 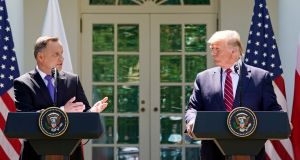 Russia has condemned US plans to increase its military presence in Poland, saying the move would stoke tensions in Europe and force Moscow to retaliate.

US president Donald Trump and his Polish counterpart Andrzej Duda signed a joint declaration on military co-operation on Wednesday, that will see the US supply military hardware to Poland and deploy additional servicemen in the country.

Mr Duda has been trying to persuade the US to establish a military base in Poland to counter what he sees as the threat of Russian aggression. But the agreement signed in Washington fell short of that, calling for an additional 1,000 American soldiers to serve in Poland and the deployment of a squadron of US MQ-9 Reaper drones in the country.

The Russian foreign ministry slammed the US-Polish agreement on Thursday as a dangerous move that would “add to military and political tensions in Europe” and leave Moscow with no choice but to retaliate.

In an angry statement the ministry accused the US of violating a 1997 Russia-Nato Foundation Act that called for the two sides to co-operate and exercise military restraint in Europe.

The US-Polish defence pact overrode one of the few remaining documents dedicated to ensuring military stability in Europe, the ministry said. “Russia cannot avoid taking this into account in military planning and practical action.”

The US has played down the impact of the coming Polish deployment, saying it will rotate additional troops in Poland and that the Reaper drones are intended for intelligence purposes. However, Russia sees the US’s growing commitment to Poland’s defence as a security threat that will only escalate.

“Assurances that these forces are supposedly insignificant must not deceive us,” the foreign ministry said. “We see this as a sign of preparation for a wide scale deployment in future.”

Russian lawmakers chimed in on Thursday with warnings of the dire risks of a US military build-up in Poland.

US Reaper drones were capable of carrying nuclear weapons and could trigger a catastrophic military confrontation in Europe, said Vladimir Shamanov, the head of the defence committee in the Russian Duma, or parliament.

“The world is gradually slipping towards a dangerous moment comparable to the Caribbean crisis,” he said, in a reference to the Cuban missile crisis of 1962 that brought the US and the Soviet Union to the brink of nuclear war. Attempts to scare Russia would not work, he added. “Russia possesses a wide arsenal of retaliatory measures for use if it becomes essential.”

Vladimir Dzhabarov, the head of the Duma’s international affairs committee, warned that Poland could pay a terrible price if its territory was used to launch an attack on Russia.

“In the event of a conflict, God forbid, the territory of Poland would become a clear target for a retaliatory strike if there was a sudden attack on us,” he said.

Russian president Vladimir Putin, who has frequently complained that Nato expansion in eastern Europe poses a threat to Russian security, has not yet commented on the US-Polish defence accord. However, in a television interview broadcast on Thursday, Mr Putin said Russia’s relations with the US “were getting worse and worse” as Washington piled on sanctions.