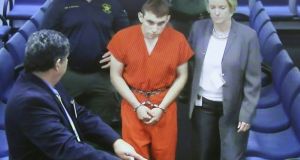 The suspect in one of the deadliest school shootings in modern US history confessed to police that he “began shooting students that he saw in the hallways and on school grounds” once on campus, according to a police arrest report released Thursday.

Nikolas Cruz (19) carried a black duffel bag and backpack, where he hid loaded magazines, the report said. He arrived at Marjory Stoneman Douglas High School in Parkland at 2.19 pm on Wednesday and pulled out a semi-automatic AR-15 rifle, according to details described by the authorities at a news conference Thursday.

Mr Cruz shot people in the hallways and inside five classrooms on the first and second floors of the freshman building. He eventually discarded the rifle, a vest and ammunition in a stairwell, blended in with fleeing students and got away, authorities said.

After leaving the school, Mr Cruz walked to a Walmart, and bought a drink at a Subway. He also stopped at a McDonald’s. He was arrested by police without incident as he walked down a residential street at 3.41 pm. “He looked like a typical high school student, and for a quick moment I thought, could this be the person who I need to stop?” officer Michael Leonard said.

Mr Cruz faces 17 counts of premeditated murder, one for each of the people he is accused of killing Wednesday in a shooting that was captured on cellphone video by terrified students. He is being held without bond at the main Broward County jail, where he has been placed on suicide watch, according to Gordon Weekes, the county’s chief assistant public defender.

Mr Cruz, who attended court dressed in an orange jumpsuit and shackled at the waist, hands and ankles, may face the death penalty for the crime. His attorney told the court her client was a “deeply troubled child” who had endured significant trauma in his life, including the death of his adoptive mother last November.

Mr Cruz was asked if he understood the circumstances. “Yes, ma’am,” he whispered. “He’s sad. He’s mournful,” his public defender, Melisa McNeill, said after. “He is fully aware of what is going on, and he’s just a broken human being.”

Mr Weekes said the lawyers were still trying to piece together the details of Mr Cruz’s life.

Mr Cruz has a “significant” history of mental illness, according to Mr Weekes, and is possibly autistic or has a learning disability. But he was not yet ready to say whether he would pursue a mental health defence.

The AR-15 rifle used in the attack was purchased legally, at Sunrise Tactical Supply in Florida, according to a federal law enforcement official. The arrest report said Mr Cruz purchased it in February 2017. “No laws were violated in the procurement of this weapon,” said Peter J Forcelli, the special agent in charge for the Bureau of Alcohol, Tobacco, Firearms and Explosives in Miami.

In the wake of the shooting, US president Donald Trump pledged to consider new measures to improve school safety, but stopped short of mentioning gun control.

Addressing the nation in a televised broadcast, Mr Trump said he would work with state and local leaders to address mental health issues, as it emerged that concerns about the suspect had been flagged to the FBI last year.

The FBI said Thursday it received information last year about a comment made on a YouTube channel which has been attributed to the gunman, but was unable to identify the person.

It emerged that the FBI had been warned about Mr Cruz following a series of social media postings last year including the YouTube posting containing the comment: “I’m going to be a professional school shooter.”

A blogger from Mississippi contacted the FBI in September and was interviewed the following day, but heard nothing from the bureau until Wednesday, hours after the shooting.

The FBI’s special agent in charge of the Miami division, Robert Lasky, confirmed on Thursday that the FBI had been informed of the YouTube posting, but was unable to identify the person who had made the comment.

“No other information was included with that comment which would indicate a time location or the true identity of the person who made the comment,” he said.

Broward County sheriff Scott Israel said on Thursday that other schools in the area received copycat threats in the wake of Wednesday’s attack in Parkland. While some may be pranks, he said law-enforcement officials were taking the threats seriously. “We will investigate this and charge anyone accordingly with the maximum charge we possibly could for doing something so horrific, so pathetic,” he said.

A white supremacist group known as the Republic of Florida has said Mr Cruz had been a member and had participated in paramilitary drills. –New York Times