Nobel laureate to defend Myanmar against charge of genocide against Rohingya 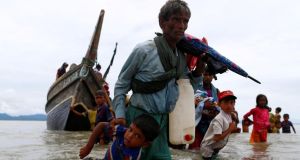 A Rohingya refugee man pulls a child as they walk to the shore after crossing the Bangladesh-Myanmar border by boat in 2017. Photograph: Danish Siddiqui/Reuters

Irrespective of the rights and wrong of the case itself, Aung San Suu Kyi’s decision to appear personally before the International Court of Justice (ICJ) and the world’s media to defend Myanmar against a charge of genocide against its Rohingya Muslim minority is a high-risk strategy.

The case is being taken by The Gambia – a small west African country with a 95 per cent Muslim population – on the basis of “universal jurisdiction”, the idea that the state initiating the legal action does not need to have any territorial connection to the offence.

The Gambia bases its claim largely on a United Nations report earlier this year which alleged that Myanmar’s military forced some 750,000 Rohingya Muslims out of their homes and into Bangladesh in 2017 in a campaign of sustained violence waged with “genocidal intent”.

Myanmar has rejected allegations of indiscriminate killing, mass rape, torture and forced displacement, saying that to the extent that its military was involved in a violent crackdown in Rakhine state, it was in an entirely legitimate counterinsurgency against Muslim militants.

It plans to counter eyewitness reports and satellite imagery used by the UN to support allegations of atrocities by contending that the Rohingya burned down their own villages and destroyed their communities in order to blame soldiers for the destruction.

Myanmar has a government made up of military and civilian leaders, and the Nobel laureate has decided to appear in person before the ICJ in The Hague next month because of her dual position as civilian leader of the country and foreign minister.

However, the job of the ICJ is to adjudicate on disputes between states, not on the criminal culpability of individuals, which is the purview of the International Criminal Court (ICC), also in The Hague. And as a state, Myanmar is responsible for the actions of all of its elements, including the military.

“The idea that there may be people in government who oppose the use of violence, not to mention genocide, does not automatically absolve any state from the responsibility it has for all the parts of its apparatus”, said one legal expert. “That is the real danger for Aung San Suu Kyi. ”

As to the case itself, it is likely that Myanmar will begin by challenging The Gambia’s entitlement to bring the action.

However, both Myanmar and The Gambia are parties to the 1948 Genocide Convention and genocide is a well-established area of universal jurisdiction. The report of the UN’s fact-finding mission will also be used to support the legitimacy of the case.

Myanmar may then challenge the ICJ’s jurisdiction to try the case on the basis of genocide. However, while some countries have supported the Genocide Convention but expressed reservations about article IX, which gives jurisdiction to the ICJ to try such cases, Myanmar has never done this. It has expressed reservations about articles VI and VIII, both of which are slightly off that point.

Also crucial will be Bosnia’s case against Serbia in 2007, in which the ICJ held that the Srebrenica massacre in 1995 was genocide.

However, it also found that Serbia was not responsible, nor was it complicit – although it had failed to act to prevent genocide or to help an international tribunal punish those responsible.

Myanmar may be challenged to show that it complied with that same unequivocal “obligation to prevent the commission of the crime of genocide” .

The ICJ case is only the first of three against Myanmar. The ICC has just launched an investigation into alleged crimes against humanity, and a third case has been filed, again under universal jurisdiction, in Argentina.