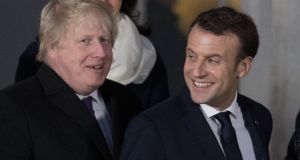 British foreign secretary Boris Johnson has publicly clashed with French president Emmanuel Macron over Brexit, rebutting the French president’s invitation to Indian students to “gain access to Europe” by boasting of the increase in their numbers arriving in the UK.

Mr Macron, who has also made overtures to financial firms seeking a possible exit from London once Britain has left the EU, made his comments during a three-day trip to India.

As Mr Macron spoke at an event in New Delhi over the weekend, his official Twitter account sent out a series of tweets in English sayinghe wanted to make France into India’s “first strategic partner in Europe”.

One tweet said: “We are at the beginning of a new momentum between France and India.” Another sought to tempt overseas Indian students, many of whom have traditionally studied in the UK, to head to France instead.

It was to this message that Mr Johnson responded, albeit a day late. He tweeted in reply: “We are proud too to have more than 14,000 Indian students coming to the UK in 2017 - up a quarter over last year - choosing the home of the greatest universities, including four of the global top ten.”

He ended with the tag #educationisgreatinenglish.

Mr Johnson’s intervention indicates the wariness of British ministers about EU nations seeking to capitalise on the UK’s changed status with the rest of Europe after Brexit.

Overseas students provide a huge economic input to the economy, with Universities UK estimating they contribute about £25 billion sterling a year, and support about 200,000 jobs around the UK.

The number of overseas students has, however, caused tensions within the government, with ministers continuing to count them in immigration targets despite official figures showing that hardly any stay on after their visa expires.

Mr Macron flew into India late on Friday with a clear message for his hosts. “France is the entry point to Europe. We want to be India’s best partner in Europe,” he said after meeting the prime minister, Narendra Modi.

Mr Macron’s office said French and Indian companies had signed contracts worth €13bn (£11.5bn) on the first full day of the trip, including a contract for aviation firm Safran to supply the airline Spice Jet with engines, and a contract between industrial gas company Air Liquide and Sterlite. - Guardian