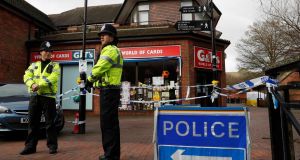 Police officers at The Maltings shopping centre in Salisbury where a man and woman were found critically ill on March 4th. Photograph: Adrian Dennis/AFP/Getty Images

Skripal (66) and his daughter Yulia (33) have been in hospital in a critical condition since March 4th when they were found unconscious on a bench outside a shopping centre in the city of Salisbury.

UK Prime Minister Theresa May is due to chair a meeting of Britain’s National Security Council later on Monday to discuss the poisoning. A British lawmaker has said the incident looked like state-sponsored attempted murder and he expected Moscow to be blamed.

Russia has repeatedly dismissed suggestions of its involvement as an attempt to demonise it.

But its flagship weekly TV news programme ‘Vesti Nedeli,’ (News of the week) on the Rossiya 1 channel went much further on Sunday evening and pointed the finger at Britain itself.

“They tried to pin the blame on Russia, but if you think it through the poisoning of the GRU (military intelligence) colonel was only advantageous to the British,” Dmitry Kiselyov, the country’s top pro-Kremlin presenter said.

“As a source, Skripal was completely wrung out and of little interest. But as a poisoning victim, he is very useful. Why not poison him? It’s no big deal. And with his daughter to make it more heart-wrenching for the public.”

Kiselyov, whose broadcast career has been advanced by Russian President Vladimir Putin, said Skripal’s poisoning opened up many “possibilities” for Britain, including organising an international boycott of the soccer World Championship which Russia is hosting this summer.

British foreign minister Boris Johnson has said London might have to review the attendance of its official delegation to the competition if it turns out Russia was behind the poisoning.

Moscow views the World Cup as an event to showcase itself internationally and officials here are worried by what they suspect is a Western plot to spoil their big moment.

A news report accompanying Kiselyov’s allegations against Britain speculated that the unknown nerve agent which poisoned Skripal and his daughter may have been manufactured in the British military’s Porton Down research facility, which it noted was only “a 20-minute drive” from Salisbury.

The report said Skripal, who it said had been recruited by the British when working as Russia’s military attache in Spain, had handed over 20,000 pages of secret documents to London and received £100,000 as a reward.