Commons speaker among those to be investigated for bullying 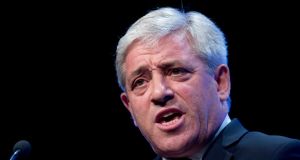 Commons speaker John Bercow: facing a call to grant an emergency Commons statement following claims of bullying of staff by MPs, in which he was allegedly involved. Photograph: Rick Findler/PA

The leader of the House of Commons, Andrea Leadsom, has announced an investigation into allegations of bullying against MPs, including the speaker, John Bercow. Ms Leadsom said she wanted House of Commons staff to have access to an independent complaints procedure set up last year for staff directly employed by MPs.

“Reports of bullying of House staff are of huge concern to me and to honourable members right across the House. I am committed to stamping out all kinds of bullying and harassment in parliament,” she said.

BBC Newsnight last week reported claims by Mr Bercow’s former private secretary Kate Emms that the speaker shouted at her and undermined her. Ms Emms was subsequently signed off sick and when she returned to the House of Commons it was in a role that did not require her to speak to Mr Bercow. The programme reported that the speaker’s office had long found it difficult to get experienced people to work for Mr Bercow.

The speaker denied the allegations, which his spokesperson dismissed as untrue. But MPs from all parties welcomed Ms Leadsom’s announcement of an investigation into Newsnight’s bullying claims, which also included allegations against Conservative MP Mark Pritchard and Labour’s Paul Farrelly.

The speaker chaired Monday’s debate himself, rather than handing over to one of his deputies, a decision that drew criticism from Conservative MP James Dudderidge.

“Is it appropriate for Mr Speaker to remain in his place while there are allegations against him which he is trying to suppress using taxpayer-funded money through sending out letters through speaker’s counsel?” he asked.

Conservative Andrew Bridgen, a long-standing critic of Mr Bercow, on Monday dropped a plan to table a motion of no confidence in the speaker. Some MPs spoke up for the speaker, praising his role in championing tougher measures against sexual harassment at Westminster. Mr Farrelly, who claimed he was being victimised by the media, warned against a rush to judgment.

A Conservative MP before being elected speaker in 2009, Mr Bercow has been a champion of backbenchers and smaller parties. Elected with the support of Labour MPs, Mr Bercow is disliked by many Conservatives, some of whom have complained that he has compromised his independence by speaking out against Brexit.

When he first became speaker, Mr Bercow said he would step down after nine years but he has recently suggested that he would like to remain in his post beyond that deadline, which falls later this year.