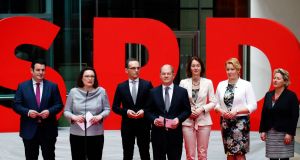 The most senior appointment, long-flagged as finance minister, is Olaf Scholz. The outgoing mayor of Germany’s second city Hamburg is a heavyweight from the SPD’s conservative wing.

Andrea Nahles, the party’s Bundestag leader and designated party chairman, praised Mr Scholz on Friday as someone with a key eye for finances: “budgetary discipline on the one hand and, on the other, future-oriented investments in education, research and infrastructure on the other”.

A political heavyweight who previously served as labour minister in Berlin, he is SPD’s most senior figure in government, and, as finance minister, has a cabinet veto. As deputy chancellor he will deputise for Dr Merkel and supervise the work of the other five SPD ministers in the new grand coalition.

A year ago Mr Gabriel stood aside to make way for Martin Schulz as party leader and Merkel challenger in the federal election. A year on both are political roadkill after the SPD’s worst result in almost 70 years, and a public spat as both claimed the prestigious foreign ministry.

In the end both were bypassed for Heiko Maas, a novice on the diplomatic stage but with experience as justice minister tackling online hate speech and pushing online state surveillance.

Ms Nahles promised he would channel his endurance as a triathlete to demonstrate “diplomatic finesse, backbone and clear stance against racism” in a world that increasingly views Germany as a “mediator in a disorderly world”.

The new SPD cabinet team of six ministers is an equal balance of gender, region and political camp within the party.

The most senior appointment among the women is Katarina Barley, a 49-year-old former judge with a British father.

Meanwhile, two regional politicians have been brought in to round out the SPD cabinet appointees The first, Svenja Schulze, will serve as environment minister just as Berlin misses its climate targets.

The biggest surprise is Franziska Giffey (39). The appointment of the mayor of Berlin’s problem Neukölln borough to the federal cabinet table is unusual for bypassing the state political level. Equally unusual is the appointment to cabinet of a politician from Berlin, a city not known as a pool of fresh political talent.

The ambitious Ms Giffey, the only eastern German at cabinet besides Dr Merkel, makes no bones about her intention to be chancellor one day. Almost six months after Germany’s federal election, the new cabinet will be sworn in next Wednesday.