20 dead and over 80 injured as train derails in India 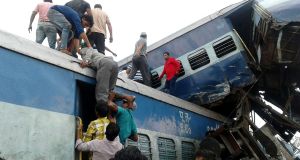 Local residents look for survivors on the wreckage of train carriages after an express train derailed near the town of Khatauli in the Indian state of Uttar Pradesh on August 19, 2017. Photograph: AFP/Getty Images 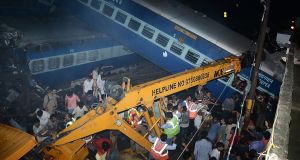 Emergency workers look for survivors on the wreckage of a train carriage after an express train derailed near the town of Khatauli in the Indian state of Uttar Pradesh on August 19, 2017. Photograph: AFP/Getty Images

A train came off the tracks in northern India on Saturday, killing about 20 people and injuring scores more, as carriages slammed into each other, officials said.

Rescuers and local people worked into the night searching for survivors in the overturned and mangled carriages, some piled on top of each other. The death toll in the the northern state of Uttar Pradesh was expected to rise, officials said.

At least eight carriages were derailed in the crash close to Muzaffarnagar, about 130km north of the capital New Delhi, as the train travelled towards the Hindu holy city of Haridwar, police said.

Train crashes are frequent in India, which has the world’s fourth biggest rail network. Poor investment in past decades in the vast network and rising demand means overcrowded trains are running on creaking infrastructure.

A senior police officer in the state, Anand Kumar, said close to 20 people had been killed and more than 80 injured.

Sanjeev Balyan, a Muzaffarnagar lawmaker, had earlier told Reuters that at least 14 people had been killed.

“We are struggling to pull out injured, and are waiting for gas cutters to arrive. It’s too dark to launch a full fledged search operation, but our teams are trying their best,” said Ajay Pandey, a senior police officer at the site.

Indian prime minister Narendra Modi sent a message on Twitter saying he was pained by the derailment of the Utkal Express, offering condolences to families of those killed and wishing a speedy recovery to the injured.

In June, it was reported that a planned $15 billion safety overhaul of India’s rail network was facing delays as the state steel company could not meet demand for new rails.

The network is in the middle of a $130 billion, five-year modernisation. The government launched the additional safety overhaul programme in February to tackle a surge in train accidents in the past two years blamed on defective tracks.

A senior official in the Uttar Pradesh government, Arvind Kumar, told the Hindustan Times the train driver had slammed the brakes on after spotting maintenance work on the tracks that was not properly signalled, the newspaper reported.

Anil Saxena, a spokesman for the railways, said it was too early to speculate about the causes of Saturday’s crash.