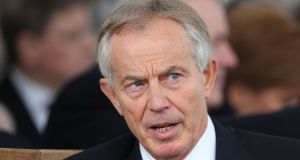 Former British prime minister Tony Blair told BBC Radio 4: “Here’s a story that is literally an invention and is now half way around the world with conspiracy theories attached to it. That’s modern politics.” Photograph: Jonathan Brady/PA Wire

Tony Blair has dismissed as a “complete invention” a claim that he warned Donald Trump’s advisers that UK intelligence may have spied on him during the presidential election campaign.

Wolff wrote that Mr Blair suggested there was a possibility “that the British had had the Trump campaign staff under surveillance, monitoring its telephone calls and other communications and possibly even Trump himself”.

Mr Blair suggested Wolff had made up both claims.

Interviewed on BBC Radio 4’s Today programme he said: “This story is a complete fabrication, literally from beginning to end. I’ve never had such conversation in the White House, outside of the White House, with Jared Kushner, with anybody else.

Mr Blair, a former Middle East peace envoy for the quartet of United Nations, the United States, the European Union, and Russia, admitted that he had met Mr Kushner, but not to discuss surveillance on Mr Trump or to lobby for a role.

Mr Blair said he was alarmed by how Wolff’s unsubstantiated claims had gained traction in the last 24 hours.

He said: “The story is a sort of reflection on the crazy state of modern politics. Here’s a story that is literally an invention and is now half way around the world with conspiracy theories attached to it. That’s modern politics.”

Wolff wrote that during the secret meeting Mr Blair shared a “juicy nugget of information”, which “churned and festered” in the president’s mind.

Wolff wrote that Mr Blair suggested there was a possibility “that the British had had the Trump campaign staff under surveillance, monitoring its telephone calls and other communications and possibly even Trump himself”.

Early in Mr Trump’s presidency a Fox News commentator claimed that three intelligence sources had confirmed to him that the Obama administration had used the British surveillance agency GCHQ to spy on Mr Trump so that there would be “no American fingerprints on this”.

Mr Trump had previously accused Barack Obama of tapping his phones during the election. The claim that British intelligence was involved was repeated in March by the then White House press secretary, Sean Spicer. At the time it was dismissed as “utterly ridiculous” by a GCHQ spokesperson.

In Wolff’s book, he also said Mr Blair had explained “that the Obama administration would not have asked the British to spy on the Trump campaign [but] the Brits would have been led to understand how helpful it might be if they did”.

Wolff said it was not clear whether the information was “rumor, informed conjecture, his own speculation or solid stuff” but that it had been shared because Mr Blair had been angling to be Mr Trump’s Middle East envoy.

Similar claims were made in March last year and were dismissed by representatives of Mr Blair as “so far beyond speculation there isn’t a word for it”. – Guardian