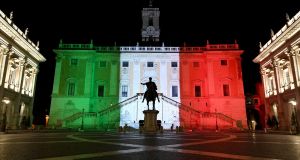 Rome’s Town Hall is lit up with the colours of the Italian flag to show solidarity with the country as it continues to battle coronavirus. Photograph: Reuters/ Alberto Lingria

An infection control experiment that was rolled out in a small Italian community at the start of Europe’s coronavirus crisis has stopped all new infections in the town that was at the centre of the country’s outbreak.

Through testing and retesting of all 3,300 inhabitants of the town of Vò, near Venice, regardless of whether they were exhibiting symptoms, and rigorous quarantining of their contacts once infection was confirmed, health authorities have been able to completely stop the spread of the illness there.

Andrea Crisanti, an infections expert at Imperial College London who is taking part in the Vò project while on sabbatical at the University of Padua, urged countries that have been limiting virus testing, which includes the UK and US, to learn lessons and ramp up the numbers of people being screened.

“In the UK, there are a whole lot of infections that are completely ignored,” Prof Crisanti said. “We were able to contain the outbreak here because we identified and eliminated the ‘submerged’ infections and isolated them,” he said of the Vò approach. “That is what makes the difference.”

The success underscores the importance of testing and isolating otherwise healthy carriers, an approach that has been strongly endorsed by the World Health Organisation. The WHO this week urged all countries to test aggressively, noting that South Korea and Taiwan were having success in limiting infections by doing so. “Our key message is: test, test, test,” Tedros Adhanom Ghebreyesus, WHO chief, said on Monday.

Prof Crisanti said the unusual – and, in some ways, accidental – testing experiment in Vò allowed researchers to obtain a full “epidemiological picture” of the disease.

The testing began as a scrambled contingency measure after Italy’s first virus-related death there on February 22nd. It is unclear why northern Italy experienced a surge in cases ahead of other parts of Europe, although Prof Crisanti and others have suggested it may be because of close commercial ties to China.

Importantly, however, this second round identified at least six individuals who had the virus but no symptoms, meaning they could be quarantined. “If they hadn’t been identified, the infection would have resumed,” explained Prof Crisanti.

Rather than extensive testing, countries including the UK and the Netherlands had been pursuing a “herd immunity” strategy, which involved allowing more people to catch the virus and develop immunity to it, as a way of building up resistance in the community, though these policies are changing as the crisis intensifies.

A WHO doctor said on Tuesday that aiming for herd immunity may not be the right way to contain the virus. Dorit Nitzan, WHO health emergencies co-ordinator for Europe, said that because so little was known about the coronavirus it was “not the right time for us to recommend” a herd immunity approach. “It is a new virus and we have to learn,” she said.

Britain has not been testing people with mild symptoms but is focusing on patients with serious respiratory illness. However, an abrupt reversal of policy by Boris Johnson’s government this week will see the UK increase testing as part of its efforts to stop new infections and “flatten the curve” so as not to overburden health services and to reduce fatalities.

In Veneto, the authorities plan to expand the aggressive testing regime in the whole region and are seeking to take at least 11,000 swabs a day. “If someone calls the [virus] hotline and says they are sick, then everyone in the family, all their friends and the whole building get tested,” said Prof Crisanti.

Luca Zaia, president of Veneto who initiated the Vò project, on Tuesday reinforced the position that widespread testing was vital. “An asymptomatic carrier can infect 10 people,” he told reporters. “Swabs can save lives.” – Copyright The Financial Times Limited 2020