Zimbabwe struggling to feed itself as natural disasters wreak havoc 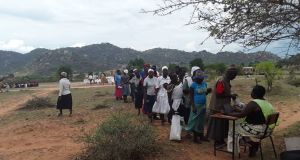 Zimbabweans queue to get a free monthly food basket at a pick-up station run by WFP and Goal in Mutare district, Manicaland province. Photograph: Bill Corcoran

Rural communities in eastern Zimbabwe hit by the full force of two natural disasters since the beginning of 2019 are struggling to survive.

Cylone Idai combined with the worst drought in living memory have left the people of Manicaland province reliant on monthly food baskets from the United Nations and Zimbabwean government.

Village elder Phonny Marange is one of 85,145 people in Mutare district – one of Manicaland’s 10 administrative areas – who qualifies for lean-season assistance from the World Food Programme (WFP), delivered on the ground by the Irish aid agency Goal.

Sitting with hunched shoulders and crossed arms at a food pick-up station near Mutare, the provincial capital, Marange describes how nature’s double whammy has strained people’s resilience to breaking point.

“Even if a person’s farm was not damaged by the cyclone in March, the drought makes it very hard for them to feed their families,” he reflects. “Most people’s only sources of income are their vegetable gardens and livestock, and without water both will die.”

Because people’s traditional food sources have been compromised, the little money they manage to earn is spent on food. The knock-on effect of this, Marange explains, is that people cannot afford medicine or to pay school fees for their children.

“People are not dying directly from hunger,” he says, “but there is a big increase in health problems for the young, old and chronically ill because our diet is poor. Most of us only eat one meal a day of sadza [a type of porridge made from maize].”

Georgina Zomba (62), a grandmother with six dependants, says the drought has forced her to become a beggar. “I have two blind children, and since August we have begged at the bus station every day to get some money for food,” she says, adding that the WFP’s food assistance means they no longer have to ask for handouts from strangers.

A knock-on effect of the drought is that she cannot take the medicine she needs to for her chronic condition. “The tablets that I have must be taken on a full stomach or they are not safe” she says, “so because we had no food to eat, I could not take the pills and my condition worsened.”

The scale of the humanitarian crisis in Zimbabwe in 2019 is said to be on a par with those affecting Yemen, Syria, the Democratic Republic of the Congo and South Sudan, countries, like Zimbabwe, dealing with major internal conflicts.

Once known as the “bread basket of Africa”, Zimbabwe’s agriculture sector imploded after former president Robert Mugabe implemented his controversial land reform programme in 2000, which saw at least 3,500 white commercial farmers forcibly removed from their land.

After Mugabe was ousted in a military takeover in late 2017, his successor, Emmerson Mnangagwa, promised to make agriculture a pillar of an economy he claimed he would revitalise.

But little progress has been made since the ruling Zanu-PF party won the disputed 2018 general election, as the government’s legitimacy is challenged by a cross-section of society, and this has given rise to a destabilising political crisis.

Furthermore, the government has had to implement harsh austerity measures and economic reforms in a bid to attract international loans and investment, and this has also hit ordinary citizens’ financial security hard, making them more vulnerable to the adverse effects of the drought.

In response to the growing humanitarian disaster in Zimbabwe, the WFP launched an appeal in August for $331 million (€300 million) to feed 2½ million of the estimated 7.7 million people – nearly half the population – who require food aid until the end of 2020.

For the coming year the WFP’s feeding programmes will continue to be supported on the ground by aid agencies such as Goal and Trócaire, which play a crucial logistical role, helping to establish food distribution stations across the drought-affected areas.

However, the UN is already in the process of scaling up its assistance from next January to feed an additional 500,000 people per month, bringing the total number it will feed monthly in 2020 to three million.

While the Zimbabwean government has also been assisting 3½ million of its citizens through its own free food programme, there are grave concerns it will face challenges to continue providing this help because of a lack of resources.

An informed source in Zimbabwe told The Irish Times the food crisis could deepen significantly in the months ahead because the nation’s strategic grain reserves appear to be on the verge of running out.

The government admitted as far back as May that it needed to import about a million tonnes of grain to meet the country’s food requirement until the 2020 harvest, the source said, but it has recently come to light that their efforts have fallen well short.

“The dwindling strategic grain reserves and the difficult logistics involved in replacing them means a rupture in the food pipeline is inevitable,” the source says.

The issue of affordability for ordinary Zimbabweans is yet another concern for aid agencies, as the country’s new legal tender, the Real Time Gross Settlement (RTGS) dollar, has devalued precipitously this year, making basic foods unaffordable for millions of people.

Exacerbating this situation is the fact that employment opportunities are severely curtailed because of the shrinking economy. The International Monitory Fund has projected that Zimbabwe’s GDP will shrink by 7.1 per cent this year.

Neighbouring countries such as Zambia and Malawi are unlikely to export maize to Zimbabwe because of shortages in those countries. In addition, South Africa has only a limited supply of GMO-free maize, which is the only type that Zimbabwe allows for import.

“Unless Zimbabwe relaxes its GMO conditionality, imports will have to be sourced on the world market. This adds further complication to filling the country’s very significant import requirement, and it will also increase costs,” the source concludes.