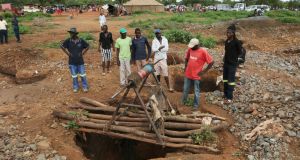 Miners gather around one of the mine shafts where gold miners are feared dead. Photograph: AP Photo/Tsvangirayi Mukwazhi

Dozens of Zimbabwean workers are missing and feared dead after torrential rain flooded mines while they were underground.

State broadcaster ZBC said that 38 miners were trapped while the state-run Herald newspaper put the number at 23.

Police said that rescue teams and pumps to drain the water have been mobilised.

“The names of the people believed to have been trapped has reached 23. Chances of rescuing any survivors are very slim,” the Herald quoted Fortunate Muzulu, the administrator for the area as saying.

Large groups of men, women and children using picks, shovels and hoes are a common sight in Zimbabwe’s mineral-rich minefields.

The miners operate without regulation and safety standards are virtually non-existent.

Zimbabwe has been working to regulate thousands of people who illegally dig for gold everywhere, including on farms and abandoned mines, mostly under the cover of darkness.

Small-scale gold producers, including illegal miners, accounted for nearly 60 percent of the record 33 tonnes of gold produced in Zimbabwe last year, according to official data. – Associated Press and Reuters