Inside the headquarters of Boko Haram’s former caliphate 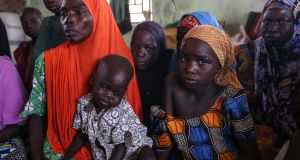 On the edges of the Sambisa Forest, a vast, colonial-era game reserve believed to be hiding a combination of of Islamist militants, the region’s disappearing wildlife, and – locals will tell you – charms and magic, the Nigerian army is keeping watch.

Along the horizon, figures will sporadically emerge from the vegetation: a lone boy, a young girl or two, a mother cradling a baby.

In a war where the majority of suicide bombers are women and children, those on guard can’t be too careful. “Stop!” a soldier will shout as soon as anyone comes within earshot. “Raise your hands up. Empty your bag. Lift up your dress.”

They’ll fire into the air to give early warnings, and continue to bellow until those approaching comply. Some – starving, and desperate to reach safety – follow orders without hesitation. Others, strapped with explosives, might not. They’ll be shot, the soldiers say.

A few months ago, those on guard watched as a teenage girl and another – even younger – abandoned hope even before the military made a move. “They got scared and blew themselves up,” one soldier recalls.

On the other side of the military checkpoint is Gwoza, a town that has gained notoriety because of its value to Boko Haram, one of the world’s deadliest terror groups, which has been waging war in Nigeria’s northeast for the past eight years.

Boko Haram captured the town of 275,000 in August 2014 and declared it the headquarters of its “caliphate”. Former captives describe militants marching through the town waving black flags, performing brutal executions and celebrating in the streets after suicide bombings.

One woman who was sold as a slave within the group tells me Gwoza’s fighters would exchange videos with Islamic State in Iraq and Syria, each boasting about their conquests and brutality. From Gwoza, orders would be pushed out to fighters across the region. Before a large military offensive against it in early 2015, Boko Haram’s territory extended to about 20,000 square miles.

Two years after it was recaptured by Nigerian forces, the land surrounding Gwoza is still highly insecure, with frequent attacks, kidnappings and ambushes along roads. But the town itself is now a guarded oasis, the safest spot for miles, and the displaced are trickling back in.

The Nigerian Army’s 192 Battalion is in charge of defences in Gwoza, and its headquarters are at an old government lodge. On one side are the Mandara Mountains, where thousands of Gwoza’s residents fled and hid, some living in caves for years. The area is unusually green and lush. When we arrive by helicopter, an officer is sitting behind a mound of sandbags, while others mill around.

Though residents are returning, many haven’t gone near their homes, instead heading straight to camps for the displaced.

Sheltering from the sun in an abandoned school building, the walls pockmarked with bullet holes, 42-year-old Bintus describes the day Boko Haram arrived in Gwoza. “They came in with guns blazing. I was indoors and didn’t know how many there were,” she recalls.

She fled with her children, moving to the next safe place, and then on again once the militants launched a fresh attack. “We had no food, no drinking water. I was afraid my children would die of starvation. They were constantly fainting.”

The family ate plants to survive. Eventually, they returned to Gwoza, arriving just 11 days before we meet. Sitting on the mat beside Bintus is Uwani Musa Dure (25). She also recently came home, but her thoughts are elsewhere.

She lists the names of her missing relatives: her teenage brother and a sister who was forced to marry a Boko Haram fighter; her mother Haziza; and her own children, Umar (10) and Hadiza (8). Her husband was killed during the assault on Gwoza.

Dure has spent the last 14 months traversing the northeast, trying to find out what happened to her family. She has visited the cites and towns of Yola, Mubi, Maiduguri and Kano, but to no avail.

When Boko Haram attacks an area, one of the first things it does is knock down mobile phone masts, with the result that reports of its atrocities are slow to circulate. In Gwoza, communications are still down, meaning the only way to get a message out is to send it with someone by road or helicopter. Returnees use a network of old neighbours and family to try to get news of missing relatives, but often their searches are fruitless.

“I get nostalgic when I see people with their parents or husbands,” Dure says. “I think too much and cannot sleep at night.”

Civilian life has come back to Gwoza. Young girls walk arm-in-arm down the street. Someone is blasting music, a cover version of Michael Jackson’s We Are the World.

Yet burned-out cars lie beside burned-out buildings. Saeed Salisu Sambo, elected chairman – the equivalent of mayor – of Gwoza last August, says 30 per cent of residents have returned. Many rushed to repaint their houses to hide the markings the militants left behind, he says. “Even the house I live in [had] ‘Allah’ painted all over it,” he says.

Just as the Islamic State terror group has done in Iraq, Boko Haram systematically destroys properties before they are recaptured, maximising the chaos and seeking to prevent civilians from returning to their regular lives.

A former medical centre in the town has clearly been set on fire, all its records incinerated. On the walls, drawings by the militants are visible. All were pictures of weapons, cars or tanks. There is also evidence of Boko Haram’s use of technology. Outside one building at the centre, a laptop had been smashed on the cement and then burned, the memory cards rendered unreadable.

The area is now a healthcare facility run by Unicef, whish has set up its own tents in the front of the grounds. In one corner is a mass grave. “That’s where Boko Haram buried their own,” one medical worker tells me. Staff are careful of where they stand – besides the hidden bodies, there’s still a risk of explosives.

Landmines, booby-traps, and other improvised explosive devices are a problem across the northeast of Nigeria, says Sinead McGrath, country director for Mines Advisory Group International, which began carrying out assessments in May. However, the ongoing conflict means verified information on the scale of the threat is scant.

“The number of victims and the exact type and extent of contamination across the region is not known,” she says. “Furthermore, the most conflict-affected state, Borno, is mostly inaccessible to humanitarian actors, so little comprehensive information is available.”

Back at the military base, Sambo struggled to explain the impact of the war on what was a rural farming community, where education was prized but most residents lived simple lives. “There are a lot of traumatised people. More than 10,000,” he says. “We were affected quite immensely, but now we’re moving beyond it.”

The politician’s younger brother was killed by Boko Haram in 2014, aged 26. His niece and nephew were abducted the same year.

At times Sambo dismisses the significance of Gwoza’s place in the war, while at other times he emphasises it. “Anywhere can be declared the caliphate. It doesn’t mean anything,” he says, dismissively, before changing his mind.

“I have to feel fear. My home was declared as a caliphate.”