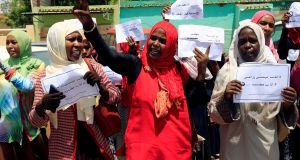 The Sudanese authorities have extended an internet blackout into a second week, forcing citizens in Khartoum to find new ways to communicate as a bloodied protest movement regroups after a brutal crackdown.

Last week, after government soldiers stormed the protesters’ sit-in in central Khartoum and left more than 100 people dead, Sudan’s network operators Sudatel, Zain and MTN switched off mobile internet access for customers. Then on Monday fixed-line internet services for most offices and houses were also cut, plunging the country into near complete data darkness.

The blackout is the latest in a series of controversial disruptions to internet services in Africa this year, where authoritarian governments are increasingly leaning on telecoms firms to shutdown communications services to disarm opposition movements or hide rights violations.

The latest disruption on Monday came as unverified reports circulated of new killings by state security forces in Zalingei, Darfur, more than 1,200km to the west of Khartoum.

A spokesman for Sudan’s military leaders said the internet had been disconnected “for a limited time” but provided no justification. One of Sudan’s international mobile operators declined to comment, citing concern for the security of its staff if it discussed the disruption publicly. The other operator did not respond to a request for comment. A spokesman for state-owned Sudatel said he had no information about any instructions from the government to shutdown services.

In Sudan’s nascent revolution, which began last December with demonstrations against former president Omar al-Bashir’s 30-year rule, internet access was as central as a sit-in outside the defence ministry in Khartoum that grabbed international attention.

Platforms including Facebook, WhatsApp and Twitter were used widely to organise protests with hundreds of thousands of images and videos shared online despite regular disruptions to access.

But a government militia known as the Rapid Support Forces cleared the sit-in with brutal force last week in a move that coincided with network disruptions that were followed by a full shutdown of mobile internet access.

While citizens are still fearful of more arrests and state-backed violence, the resistance is already evolving, activists said. The focus of opposition activities has shifted to small neighbourhood committees that are providing the new backbone of the struggle.

“Right now, everything is being done inside the neighbourhoods,” explained Muzan Alneel, a 33-year-old mechanical engineer who has participated in the demonstrations since December. “People are trying to minimise their movement . . . and coming up with new tools to share information,” she said.

The neighbourhood committees were set-up in January initially to help set the routes of anti-government marches through the city’s different districts. Since then the groups have become important sources of collective strength for Khartoum’s population and they have found renewed purpose since the sit-in was demolished, said Sulaima Ishaq Sharif, an activist and mental health worker.

On Saturday, as RSF soldiers patrolled central Khartoum, as many as 300 protesters gathered in Sharif’s neighbourhood in the Omdurman area of the capital northwest of the centre. Organised into four committees of 50 to 60 households, the community groups in her district are working to sustain the resistance by passing information, providing financial support to those families in most need and building barricades on neighbourhood streets.

The work is knitting communities together in ways that Sudan’s military leaders will struggle to break, said Sharif, who has been treating protesters for psychological trauma at the sit-in and in Omdurman since the demonstrations began.

“During the protests, you find safety in somebody’s house, you meet people from your neighbourhood you never knew,” she said. “It’s integrating people.”

The neighbourhood mobilisation is generating confidence among Khartoum’s residents that they can continue to oppose the might of the Sudanese armed forces.

When 38-year-old Rasha Adam receives any information about protests or military activity in the city she sends it to 20 friends by SMS texts, which are delivered via the cellular network rather than the internet. Each recipient is then expected to forward it to another 20 people, she said.

Her neighbourhood committee in the Bahri area of the capital, north of central Khartoum, put up barricades three days after the raid on the sit-in. They have been sharing information and supporting each other ever since.

“Now is only the beginning,” she said. – Copyright The Financial Times Limited 2019