Spike in malaria due to climate change, Ugandan government says 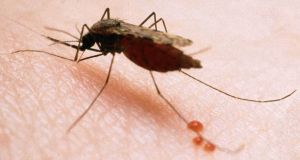 Uganda’s health ministry has said a sharp rise in malaria is partly attributable to climate change, after more than one million people contracted the disease within the past two months.

This shows an increase of 40 per cent on this period in 2018, according to the government.

While there is usually a spike in malaria cases at this time of year, unusually prolonged rains in June meant mosquitoes had more time to breed, the East African country’s health ministry said.

Malaria is an infectious disease spread by mosquitoes, with symptoms usually appearing 10-15 days after someone is bitten.

“Malaria has got a big factor of climate,” Dr Jimmy Opigo, assistant commissioner of health services at Uganda’s National Malaria Control Programme, told the BBC. “The weather changes are cyclical. We seem to know now that a higher range happens every three to four years, but this year it is unique because also there is a one degree rise in temperature over the last 10 years.”

Opigo said conditions allowing mosquitoes to thrive will continue until the beginning of September. “We have prepared for a three-month battle because we cannot undo the weather, all we can do is mitigate its impact and make sure people don’t die.”

Uganda’s government gave out 26 million free mosquito nets to its population in 2017, but many now have holes or other problems. Opigo said they plan to distribute more early next year.

In July, local media reported that the Ugandan government is also establishing an insectarium in a bid to tackle malaria. The insectarium will be used to conduct research on genetically modified mosquitoes.

Burundi, a small Great Lakes country to the south of Uganda, is also experiencing unusually high levels of malaria. Almost half of the population is infected, according to the World Health Organisation.

Experts say this is also related to climate change, and mosquitoes are becoming more aggressive while reaching higher altitudes.

The death toll in Burundi has topped 1,800 since the start of the year – roughly the same number that have died from Ebola in nearby Democratic Republic of the Congo, since the Ebola outbreak began one year ago. Burundian victims included Darcy Irakoze, a six-year-old YouTube star known as Kacaman, who died last week.

In 2017 there were an estimated 219 million cases of malaria in 87 countries globally, according to the World Health Organisation. About 435,000 people are estimated to have died from malaria that year alone.

Children under five account for the majority of malaria deaths, with Unicef saying 3,000 die every day from the disease.