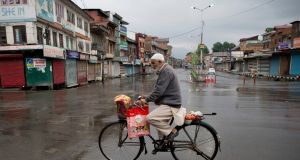 India’s federal government has tightened security measures in the northern disputed Jammu and Kashmir region, ahead of the country’s Independence Day celebrations on Thursday.

Extra paramilitaries and police have been deployed, in the latest measure to follow the August 5th decision to revoke Kashmir’s special constitutional autonomous status conferred on it over seven decades ago, which permitted it to make it own laws and fly its own flag.

All communication links including mobile and landline telephones, internet and television networks were inoperative for the 10th consecutive day across the region, whilst the publication of nearly all of Srinagar’s many daily newspapers remained suspended.

The annulment of Article 370, which conferred special status on Kashmir more than seven decades ago, included scrapping the provision banning outsiders from buying property in the state.

Locals fear this will lead to the “ethnic dilution” of Kashmir’s Muslim majority as it will encourage Hindus to move into the region and rob it of its distinctive Sufi character.

The government also bifurcated the state into two federally administered territories: the northern Buddhist region of Ladakh, bordering Tibet, and Jammu and Kashmir. Both areas will be administered by New Delhi.

The authorities went to great lengths to portray a picture of near normalcy across Kashmir, but admitted to “minor, localised” incidents of stone pelting in Srinagar on Tuesday. They denied television reports of police firing to quell protests or of seething restlessness.

“The choice is between inconvenience caused by restriction of movement and loss of life,” a federal home ministry official said. “Our concern is to ensure the safety of Kashmir’s citizens.”

Other officials in Srinagar said restrictions would be relaxed across the region over the next few days, based on local assessments. “We hope that once the Independence Day celebrations are concluded, the situation will ease further,” said Kashmir’s government spokesman Rohit Kansal.

In a related development, Shah Faesal of the Jammu and Kashmir People’s Movement was arrested at Delhi’s international airport on Wednesday, from where he was to leave for Istanbul, and was taken back to Srinagar where he has been placed under “preventive detention”.

The arrest of the former civil servant, who recently resigned his job and returned home to work for peace in insurgency-ridden Kashmir, followed his fiery interview with the BBC on Tuesday evening, in which he castigated the federal government for abrogating Article 370.

He declared that through its actions the government had imposed a Hobson’s choice on all Kashmiris of either becoming “official stooges or separatists”.

Mr Faesal joins some 300 politicians, including two former Kashmir chief ministers, detained in Kashmir since the government’s suspension of its autonomy last week.

Other opposition leaders from the Congress and Communist Parties, who attempted to visit Srinagar from Delhi, were turned back by the authorities earlier this week, on the grounds that their presence would exacerbate Kashmir’s already volatile situation.

Mr Modi again justified his government’s actions on Kashmir. In an interview with an Indian news agency he declared that scrapping Kashmir’s status was “about the nation and not politics” and was undertaken because the region had been unable to “fulfil people’s [economic] aspirations”.