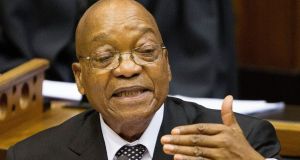 South African president Jacob Zuma: decision taken by him and the minister of justice Michael Masutha to withdraw from The Hague-based court without parliamentary approval amounted was a breach of the separation of powers. Photograph: Nic Bothma

The South African government’s decision to withdraw from the International Criminal Court (ICC) last October was unconstitutional, invalid and must be revoked, the high court in Pretoria has ruled.

On Wednesday, the court determined the decision taken by President Jacob Zuma and the minister of justice Michael Masutha to withdraw from The Hague-based court without parliamentary approval amounted to a breach of the separation of powers.

Deputy judge president Phineas Mojapelo ordered the ANC-led government to withdraw its notice to revoke its ratification of the Rome Statute, the ICC’s founding treaty, as parliament’s approval was required before such an action could be taken.

The ruling will be seen by many as a victory for human rights in Africa, at a time when they appear under threat. A number of African governments have warned they may withdraw from the ICC because of a perception it is biased against the continent’s leaders.

To date, the majority of the ICC’s investigations and all of its prosecutions have related to Africans involved in war crimes in African countries.

The South African government’s decision to leave the ICC came after two local court judgments that stated it had violated the law by not arresting Sudanese President Omar al-Bashir during his visit to South Africa for an African Union summit in June.

The ICC issued an arrest warrant for Mr al-Bashir in 2009 after charging him with five counts of crimes against humanity. They included allegations of mass murder and rapes committed by soldiers and militias under his command in Darfur between 2003 and 2008. After the government announced its intentions to quit the ICC, the main opposition Democratic Alliance applied to the courts to have South Africa’s withdrawal set aside on the grounds it was “unconstitutional, irrational and procedurally flawed”.

The government has argued that its obligation to arrest heads of state charged by the ICC impeded its diplomatic and peacekeeping efforts on the continent.

However, the Democratic Alliance argued the government’s intention to leave the ICC directly contradicted South Africa’s commitment and legal obligations to international justice and human rights.

In his response to the high court ruling, Mr Masutha said the government still intended to quit the ICC, and would consider its options after studying the judgment, Reuters news agency has reported.

The high court’s ruling also comes at a time of intense debate within the African Union around whether a mass withdrawal from the court should be instigated by member countries. Burundi and Namibia have already said they were considering withdrawing from the ICC. Gambia already did so, but the country’s new leader, Adama Barrow, recently announced it intended to rejoin the court.