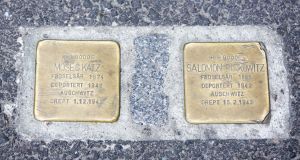 The simple brass plaque embedded in the pavement is easy to miss. I had walked by it many times without noticing until I quite literally, as the name implies, stumbled upon it right in my neighbourhood. It is one of many such snublesteiner, or stumbling stones, dotted around Oslo.

Despite its similarity to a gravestone, a key piece of information that is missing points to the fact that this is a different type of inscription. There is no “here lies” on this stone.

The memorial plaque, erected in 2012, reads:

The apartment building where Leimann once lived sits a little incongruously next to a more modern apartment block, but little else has changed on the street.

A tailor, Leimann was married and had a five-year-old daughter, Valli. On October 26th, he was part of a consignment of men over the age of 15 who were arrested by the Norwegian Nazi Party, headed by Vidkun Quisling. One month later, Leimann was deported to Auschwitz.

Of the 532 Jews who boarded the German cargo ship SS Donau at Oslo’s Amerikalinjes kai (American line quay) on November 26th bound for Nazi concentration and extermination camps, only nine survived the war. There were 302 men, 188 women and 42 children on board.

All told, 772 Jews were deported from Norway in four voyages during the second World War – only 34 came back.

The German artist Gunter Demnig began the stumbling stones – Stolpersteine in German – project in the early 1990s in Berlin and the cultural initiative has now spread to several countries. The concept is simple but effective. The stones are, as Demnig puts it “a social sculpture” that compels passersby to look down and identify with real people in neighbourhoods that are still recognisable.

The Feinberg family’s final home is situated a short distance from where Leimann lived. The entire family of four were arrested on November 26th, 1942. Rachel Feinberg’s brother, Kai, was among the few Norwegian Jews to survive Auschwitz and return to Norway.

His last memory of his 19-year-old sister is her waving to him with her red woollen cap as she was led to the gas chamber with her mother, Clara, on December 1st, 1942. His father, Elias, died soon afterwards of pneumonia in Monowitz labour camp, a subcamp of Auschwitz. When Kai Feinberg returned to Oslo after the war, having lost his entire family, he found his home occupied by strangers.

The largest deportation of Jews took place in an apartment block which now houses the Jewish Museum. A snublestein outside the building on Calmeyers street commemorates the 19 victims who were mustered together in a dawn raid on that fateful, cold day in November.

The area around the apartments was fenced off with barriers as the Jewish residents assembled in confusion. Rumours of arrests would most certainly have been circulating at this stage. One witness was later to record that there were “heart-breaking scenes” with faces “marked in terror and despair” as people waited to be crammed into the awaiting truck.

Rabbi Jacob Bodd, with his wife and two daughters Anna Rebekka (13), and Manja (11), assembled with neighbours such as Sonya Ester Moritz and her two sons, aged five and nine.

Every mother and child who lived on Calmeyers street would later fail the first camp inspection, carried out to identify those deemed able to work. They would all be sent to the gas chamber immediately upon arrival.

Gisela Bernstein (54), it is hoped, had some comfort in the knowledge that her two teenage children had made it to safety in England. About 60 per cent of Norwegian Jews managed to escape to safety, primarily to neutral Sweden.

Annual memorial services take place on the Oslo quayside where the Norwegian Jews, destined for a barbaric death in Auschwitz, were forced into ships.

There is a memorial there in the form of eight seatless, empty chairs symbolising the absence of rest and comfort. Significantly, the memorial to those who perished is situated outside the walls of Akershus Fortress to highlight the fact that, under Nazi rule, Jews were completely excluded from Norwegian society.

The symbolism of the snublesteiner serve as a stark social reminder which is all too often lost in a mire of Holocaust statistics. In their sheer simplicity, the stones trigger a response by connecting the “here lived” with the living while at the same time emphasising the evils of totalitarianism.