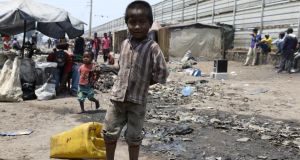 A young boy carries a tank to collect water in Antananarivo in Madagascar. Malagasy officials announced last month that the city’s coffers were empty and there was no funding for rubbish collection. Refuse has been piling up, encouraging the growth of the rodent population. Photograph: Stephane de Sakutin/AFP/Getty Images

The director of Toliara jail in southwest Madagascar is wary of giving a wrong impression. “Sure we have rats, but lots of places do,” says Serge Idriss Hasambarana. “We catch maybe 10 or so a month. Maybe more. The Pasteur Institute gave us traps.”

Some 600 prisoners are held here in four cramped cells, a situation Hasambarana insists he is powerless to change. “Look around,” he says, pointing to the crumbling walls and peeling paint of his sparse office and adjacent buildings. “This place was built by the French, and it hasn’t been touched since. We need a lot of improvements around here but we don’t get any money for it.”

With temperatures above 40 degrees on many summer days, the overcrowded conditions in this city centre institution are perfect for the transmission of disease. Fortunately for the inmates and their visitors, Madagascar’s southwest region of Atsimo Andrefana remains clear of bubonic plague, which recently killed at least 42 people on this African island nation.

Health experts have warned that the former French colony faces an epidemic of bubonic plague unless it slows the spread of the rodent-borne disease. The International Committee of the Red Cross (ICRC) and Pasteur Institute say prisoners in the country’s rat-infested jails are especially at risk, and are working with local health groups on a campaign to improve prison hygiene by exterminating rats, fleas and cockroaches. Prisoners are given rat-traps and insecticide.

The 3,000 inmates of Antanimora, the main prison in the capital Antananarivo, live with a huge rat population that spreads infected fleas through food, bedding and clothing, according to the ICRC.

Rodent control
“Rat control is essential for preventing the plague because rodents spread the bacillus to fleas that can then infect humans,” said Christoph Vogt, head of the ICRC delegation in Madagascar. “So the relatives of a detainee can pick up the disease on a visit to the prison. And a released detainee returning to his community without having been treated can also spread the disease.”

Known as the Black Death due to the blackening of victims’ skin, bubonic plague swept through Europe in the 14th century, killing an estimated 25 million. It is rare today, but Madagascar has the highest incidence in the world. In 2012, the Indian Ocean island reported 256 cases of plague and 60 deaths. Since the most recent plague “season” began last October, the health ministry has reported 42 deaths out of 84 cases, of which 60 are thought to be pneumonic or pulmonary plague, a more virulent strain than the bubonic type.

While bubonic plague is usually transmitted through bites by rat-borne fleas – it does not spread from person to person – and is treatable with antibiotics, the more deadly pneumonic plague can be inhaled and transmitted between humans. It can kill within 24 hours.

The northern district of Mandritsara saw the rapid spread of pneumonic plague in November when panicked locals from the remote village of Beranimbo fled to neighbouring villages after five of their own people died from the disease. The plague spread, killing a further 16 and introducing the disease to Soanierana Ivongo, where another nine people died.

Last month, just as presidential and parliamentary elections were getting under way, Malagasy officials announced the capital Antananarivo’s coffers were empty and there was no funding for rubbish collection. Refuse has been piling up, encouraging rats and mice. The UN Development Programme and the European Union have donated funds and equipment to help clear the city of garbage.

Rat tests
In Toliara, prison director Hasambarana says experts from the Pasteur Institute tested live rats from the jail about a year ago, and the results were negative. He makes a point of talking about the two babies who are being raised in the prison. There are 15 minors and 25 women. The women and children are held separately from the men, he says. There is one meal: boiled and mashed cassava (manioc). “We don’t have la peste here – but we have many other problems. Thankfully we don’t have a plague to add to that list.”