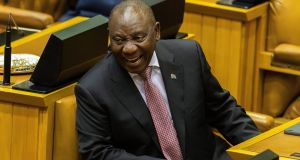 Cyril Ramaphosa is set to emphasise national unity when he is sworn in as South Africa’s fifth post-apartheid president at Loftus Versfeld Stadium in Pretoria on Saturday. Photograph: Nic Bothma/EPA

The leader of South Africa’s ruling African National Congress party will be inaugurated as the country’s next president this weekend following its reduced majority victory in this month’s general election.

Cyril Ramaphosa will be sworn in as South Africa’s fifth post-apartheid president at Loftus Versfeld Stadium in Pretoria on Saturday before thousands of citizens and international guests.

According to Mr Ramaphosa’s spokeswoman, Khuseka Diko, the president will use the occasion to outline the type of government he wants to lead; to emphasise national unity in a country beset by racial tensions; and to reassert South Africa’s role as one of Africa’s major powers.

However, looming large over the occasion will be questions about whether Mr Ramaphosa has a strong enough grip on his party to implement his plans to tackle the country’s struggling economy as well as corruption in government and the ANC.

Since taking over on an interim basis from Jacob Zuma, who was forced to stand down in February 2018, Mr Ramaphosa has started the job of tackling the rot and incompetence that became synonymous with his predecessor’s rule.

However, there are major concerns he will be forced to appoint corruption-tainted individuals to his new cabinet to ensure the different ANC factions are kept happy and willing to support his presidency.

In the run-up to the May 8th election the make-up of the ANC’s candidates list for parliament and the provincial legislatures included 33 individuals accused of – but not charged with – crimes ranging from corruption to murder, which sparked a public outcry.

In addition, many of these people were aligned to Mr Zuma, who is currently fighting to have fraud and money-laundering charges related to a multibillion-rand arms deal dismissed, during his nine-year presidency.

But when South Africa swore in its new 400-member parliament on Wednesday most of the suspect individuals either declined to take their seats, postponed their appointments in order to try to clear their names, or did not make the cut.

Among those forced to postpone was deputy president David Mabuza – the ANC integrity commission has raised questions about his conduct – which means if he does not clear his name Mr Ramaphosa will likely appoint a new second-in-command.

This has raised hopes the new cabinet he names early next week, which is expected to be much smaller than the one he inherited in February 2018, will be competent and unencumbered by the corruption allegations that undermined government executives over the last decade.

Although it won the May 8th election relatively easily, the stakes over the next five years for the ANC could not be higher.

The ruling party’s support dropped by nearly five percentage points to 57.50 per cent of the vote from 62.15 per cent in 2014. This suggests voters may abandon it in droves at the next poll if Mr Ramaphosa fails to make good on his election promises.