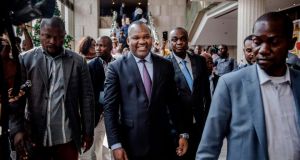 The Democratic Republic of Congo’s electoral commission president, Corneille Nangaa (centre), leaves after a meeting between CENI, SADC and other presidential candidates in Kinshasa, on December 29th, 2018. He has said it is unclear when the results of the election will be known following the delay in gathering tally sheets Photograph: Luis Tato/AFP/Getty

Preliminary results from Democratic Republic of Congo’s tumultuous presidential election was delayed past Sunday’s deadline, the head of the election commission said.

The commission, known as CENI, had received only 47 per cent of vote tally sheets as of Saturday, said its president, Corneille Nangaa, and it was not yet clear when the results would be ready.

The delay is the latest setback in a disorganised poll to pick a successor to president Joseph Kabila, who has ruled the country of 80 million people since his father was assassinated in 2001.

The December 30th vote could mark Congo’s first democratic transition of power since independence from Belgium in 1960. But tensions rose after observers reported a litany of irregularities that the opposition says are part of the ruling party’s effort to steal the election.

The opposition, represented by its two main candidates Martin Fayulu and Felix Tshisekedi, and the ruling coalition all say their candidates have won. “It will not be possible to announce the results tomorrow,” Nangaa said.

Worried that disputes and delays could spark the kind of violence seen after the 2006 and 2011 elections, the United Nations Security Council met on Friday to discuss how to react, but was unable to reach an agreement, according to an internal report seen by the news agency Reuters.

The United States condemned a lack of transparency in the contest, while China, a major investor, lauded the process.

“Tensions were mounting while the CENI tabulated the results, notably in light of posturing by parties and candidates,” Leila Zerrougui, head of the UN Stabilization Mission in Democratic Republic of Congo, told the meeting, according to the internal report.

But the 15 council members “differed in their appreciation of the problems that beset the process and were divided over the question of whether the Council should issue a press statement”, the report went on to say.

A negative international reaction could be problematic for Mr Kabila, whose government has defended the election’s organisation, and could weaken the legitimacy of Mr Kabila’s hand-picked successor, Emmanuel Ramazani Shadary, should he be declared winner. – Reuters