Police investigate after woman in coma for a decade gives birth 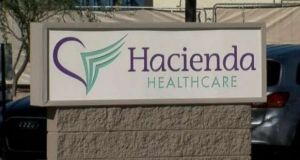 The pregnant woman, who was incapacitated in a drowning incident, was a patient at a Hacienda Healthcare facility in Phoenix.

Police in the US city of Phoenix on Saturday were investigating reports of a sexual assault after a woman who has been hospitalised in a vegetative state for the past decade gave birth.

The woman, who was incapacitated in a drowning incident, was a patient at Hacienda Healthcare when she went into labour on December 29th and delivered a baby boy, according to local media.

No one knew she was pregnant and healthcare staff were initially unsure why she was moaning, the reports said.

“This matter is currently under investigation by the Phoenix Police Department, ” Sergeant Tommy Thompson said when asked about the media reports.

Hacienda spokesman David Leibowitz said the facility had recently become aware of a “deeply disturbing incident” involving one of its residents.

He declined to say whether its staff were being asked to undergo DNA testing to identify a possible suspect, or whether the facility was taking any preventative measures to protect patients against a similar situation.

“While federal and state privacy laws prohibit us from publicly discussing a patient’s health or case, Hacienda has and will continue to cooperate fully with law enforcement and all the relevant regulatory agencies regarding this matter,” Leibowitz said by email.

Victim advocate Tasha Menaker, chief strategy officer of the Arizona Coalition to End Sexual and Domestic Violence, said it would be appropriate for police to run DNA tests on male employees at the facility.

Hacienda HealthCare describes itself as Arizona’s leading provider of specialized health care services for medically fragile and chronically ill infants, children, teens, and young adults as well as those with intellectual and developmental disabilities.

A spokesman for Arizona Governor Doug Ducey said the reports were “deeply troubling” and that the state was re-evaluating its contract and regulatory authority over Hacienda Healthcare to tighten up patient safety measures. - Reuters