Mahamadou Issoufou is first winner of Ibrahim foundation prize since 2017 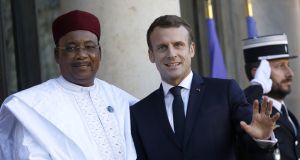 Niger’s president Mahamadou Issoufou has been awarded the $5 million (€4.2 million) Ibrahim African leadership prize in recognition of what the judging committee called his “exceptional leadership after inheriting one of the world’s poorest economies [and] facing seemingly insurmountable challenges”.

Niger, which has the fastest-growing population in Africa, is widely considered a fragile state with multiple security concerns, a long history of coups, and desertification aggravated by climate change.

The Ibrahim prize committee judged that Mr Issoufou, who will step down this year after a run-off election to determine his successor was held last month, had brought a degree of stability and development in difficult circumstances. Above all, he had abided by the constitutional two-term limit, it said.

During his decade in office, according to the prize citation, Niger’s output grew from $8.7 billion to $12.9 billion, raising per capita income by 16 per cent. Infrastructure was built, human development indicators such as child and maternal mortality improved, and the number of people living in poverty fell from 48 per to 40 per cent, it said.

Mr Mogae, a former prize recipient, added: “We are acutely aware of the context in which we made this prize, the challenges facing this country. He did the best [he could] in difficult circumstances.”

The Ibrahim prize aims to reward good leadership in a continent where democracy has drifted in recent years and where politicians are sometimes held in popular contempt. Mr Issoufou’s decision not to contest elections contrasts with recent events in Guinea, Ivory Coast and Uganda where the constitution was amended or reinterpreted to allow the incumbent to stand again.

The $5 million Ibrahim prize is open to democratically elected leaders who step down after their mandated term and who are seen to have improved governance, social welfare and living standards.

It has been awarded six times since it started in 2007, with the last award given to Ellen Johnson Sirleaf, former president of Liberia, winning in 2017. In years when no leader is judged a worthy recipient – eight out of 14 so far – the prize is not awarded.

As president, Mr Issoufou was considered an ally of the west in the fight against jihadist insurgencies, although in Niger his decision to allow the French and US military to operate in the country brought criticism as well as praise.

Opponents have accused Mr Issoufou of being authoritarian and of not doing enough to broaden opportunity beyond a narrow elite. In a 2018 interview he defined democracy as order and liberty. “Order without freedom is dictatorship. Freedom without order is anarchy,” he said.

Niger, a landlocked country of 24 million people situated in the semi-arid Sahel region, faces grave security threats spilling over from neighbours, including Boko Haram from north-east Nigeria, al-Qaeda in the Islamic Maghreb from Algeria and jihadist insurgencies from Mali. Under Mr Issoufou it suffered several terrorist attacks, but was less affected by militant activity than neighbours including Burkina Faso, Mali and Libya.

Mo Ibrahim, a Sudanese businessman whose eponymous foundation seeks to promote good governance, has spoken about a worrying slippage in democracy in much of Africa. Mr Ibrahim, who is not on the prize committee, welcomed the award, calling Mr Issoufou “an outstanding leader” who has met “some of the region’s toughest challenges with determination and respect”. – Copyright The Financial Times Limited 2021