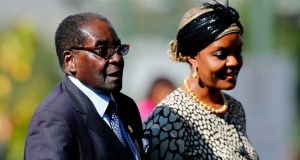 Robert Mugabe, pictured with his wife Grace, was forced out as leader of Zimbabwe earlier this week after 37 years in power. Photograph: Siphiwe Sibeko/AFP/Getty Images

The end of the Mugabe presidency – with the swearing in of Emmerson Mnangagwa in Harare on Friday – is being watched closely across Africa, and especially by its long-standing leaders.

Currently, 30 per cent of African countries are ruled by long-standing rulers, defined as heads of state that have ruled for more than 10 years. Africa is not unique in this respect (Central Asia also has its share of ageing leaders), but Africa has a long tradition and about a fifth of all African heads of state since independence can be classified as long-standing.

A recently study, African Futures: Horizon 2025, by the European Union Institute of Security Studies (and which this writer contributed to), shows that long-standing rulers in Africa are reducing in number.

This leaves a cluster still of other ageing leaders: Teodoro Obiang Nguema Mbasogo of Equatorial Guinea (38 years); Paul Biya of Cameroon (35 years); Yoweri Museveni of Uganda (31 years); Omar al-Bashir of Sudan (28 years); and eight others. Many of them are coming under increased internal pressure.

Demonstrations against Togo’s Faure Gnassingbé in Lome over the summer resulted in him agreeing that any future president could stand for only two terms. In the Democratic Republic of the Congo, Joseph Kabila is also under increased pressure to agree to elections, after 16 years in power.

Within all of this we do see a pattern of long-standing leaders in Africa adopting the principle of only serving two terms.

Long-standing rulers still thrive in central Africa and its Great Lakes region. Presidents here have successfully changed constitutions to remain in office. They include Denis Sassou Nguesso of the Democratic Republic of the Congo and Yoweri Mesevni of Uganda. Zimbabwe will be a warning to them that they should not assume that they will be able to behave as de-facto monarchies and die of natural causes or hand power over to their family.

Robert Mugabe’s intention to hand power to his wife, Grace, spectacularly back-fired – as a couple of Zimbabwe military officials dryly commented: “Leadership is not sexually transmitted.”

Former president Hosni Mubarak in Egypt also miscalculated by trying to groom his son, although Ali Bongo Ondimba succeeded his father as president of Gabon after his father died.

Equatorial Guinea is still heading for a crisis as President Obiang is grooming his deeply unpopular playboy son, Teodorin to succeed him.

What Zimbabwe reminds us is that, with the exception of central Africa, we will be seeing more long-standing leaders in Africa disappear over the coming decade. This is due partly to pressure and partly to their ageing: 13 current long-standing rulers are aged between 65 and 84 years old.

This means we will see more transitions taking place such as the one that occurred in Zimbabwe on Friday or the smooth one in Angola in September, when president dos Santos stepped down and handed power to Joao Lourenco.

This is good news for Africa, which has the most youthful and fastest growing population in the world. It is the second-largest and second most populated continent globally. More than 40 per cent of Africans are under 15, and 20 per cent are between 15 and 24.

By 2050, one third of the world’s youth population will live in Africa: up from one fifth in 2012. This means a dramatic disconnect is developing between long-standing leaders and their population.

Generational politics was visible over the past week in Zimbabwe and in the end the older generation prevailed through military intervention. This is transitional politics, and we are likely to see more of it.

Other long-serving leaders such as Yoweri Museveni of Uganda have watched closely. Museveni responded already to shore up support of his military by giving them a significant pay rise. We are likely to see more investment in the military by Africa’s long-standing leaders in the coming months.

Change in Africa comes in fits and starts. The fall of Mugabe is a reminder that Africa is dynamic and change is occurring all the time. Africa’s long-standing leaders will come under increasing pressure to demonstrate their societal value. Some will become more oppressive; others may conclude that their time has expired and that they should welcome a transition.

This is the key lesson of Angola – where president dos Santos willingly retired after 37 years in power. Mugabe dreamed of dying in office and being succeeded by his wife – and was forced out by the military. I predict both models will be repeated in Africa in coming years.